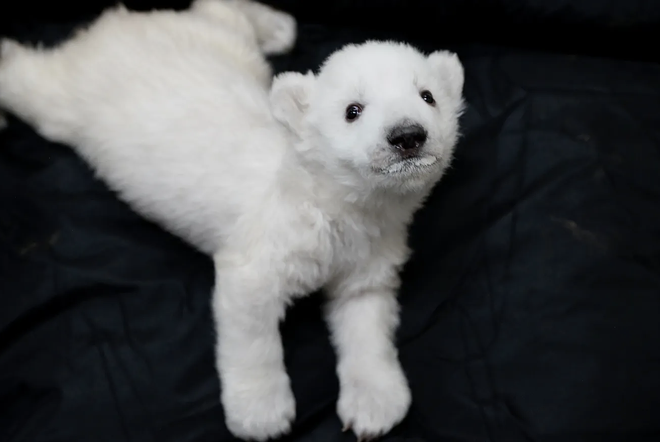 If you're busy trying to reverse-engineer your Twitter feed to try to figure out how Reddit users have dismantled Wall Street or why famous women named “Kate” are trending while dodging WandaVision spoilers, don't. Stop, drop your phone, and soak in the unadulterated cuteness of the Detroit Zoo's latest fluff ball additions.

Unnamed twin polar bear cubs were born to mama Suka and father Nuka in the Detroit Zoo's “specially-designed, private maternity den” in November. This marks the Zoo's first polar bears to be born and raised on-site since 2004. Though 8-year-old Suka gave birth in 2018 and 2019, the cubs did not survive.

One of the two cubs is not out of the woods yet, however, as it's currently being cared for by zoo staff, receiving fluids and formula after appearing weak and inactive just a couple of days after birth. According to zoo staff, she's gained a significant amount of weight while in observation (10 lbs) and has graduated from incubator life to “playpen,” though it remains uncertain if she'll be able to rejoin her family once out of observation. But don't worry — the zoo says there are other bear families she can sync up with.

The other cub, on the other hand, is being cared for by Suka who, the zoo says, is being a “very attentive” mom and is nursing, grooming, and snuggling her baby constantly, which is exactly what we want to be doing to that cub, minus the nursing part because obviously we're not that messed up.

Both cubs, though living very different baby experiences, have opened their eyes, have teeth coming in, and are learning to wobble, err, we mean, walk.

Though the zoo is open, the cubs aren't viewable to the public, as they're being raised in private areas away from other bears so that they can be closely monitored by zoo staff. The underwater Polar Passage, which is a fixture of the zoo's massive Arctic Ring of Life, is closed due to pandemic safety measures.

We, the adoring public, won't be left in the cold entirely when it comes to inhaling (because that's what we want to do) the new additions. The zoo says it'll share updates, videos, and photos of the cub's progress across its social media pages which is a far better use of our screen time than, you know, trying to figure out how to buy GameStop stock.