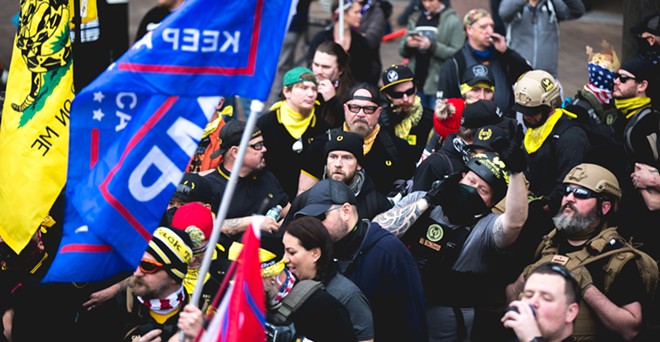 According to the Southern Poverty Law Center's annual "Year in Hate and Extremism" report, released Monday, the number of active hate groups in America declined for a second year.

However, this doesn't mean America is any less hateful. The authors caution this just means many organized hate groups have migrated online, a move exacerbated by the coronavirus pandemic, where they're more difficult to track.

The violent insurrection at the U.S. Capitol on Jan. 6 further points to the mainstreaming of hate groups, the authors say, as does a recent — and rare — National Terrorism Advisory System Bulletin from the U.S. Department of Homeland Security that warns of a heightened threat of domestic terrorism from militia groups.

"The number of active hate groups in the SPLC census, conducted each year since 1990, is a barometer of extremism in the country, but not the only one – and the drop from the previous year does not signal a decline in extremist activity or the threat of domestic terrorism," the SPLC says in a statement.

"The insurrection at the Capitol was the culmination of years of right-wing radicalization," Susan Corke, director of the SPLC's Intelligence Project, says in a statement. "Most recently, it was the product of Donald Trump's support for and encouragement of radicalized individuals and groups to buy into conspiracy theories about a 'stolen election.'"

She added, "Trump may no longer be in the White House, but the white nationalist and extremist movement he emboldened and incited to violence is not going anywhere — and may grow more dangerous to our country."

According to the report, in a survey conducted in August, 29 percent of respondents said they personally know someone who believes that white people are the superior race. The poll also found that 51 percent of Americans thought the looting that occurred in several cities amid Black Lives Matter protests was a bigger problem than police violence against Black people.

The SPLC does not consider Black Lives Matter to be a hate group. According to an FAQ page on its website, "While its critics claim that Black Lives Matter's very name is anti-white, this criticism misses the point. Black lives matter because black lives have been marginalized for far too long. As BLM puts it, the movement stands for 'the simple proposition that 'black lives also matter.'"

The SPLC defines a hate group as an organization or collection of individuals that "has beliefs or practices that attack or malign an entire class of people, typically for their immutable characteristics. An organization does not need to have engaged in criminal conduct or have followed their speech with actual unlawful action to be labeled a hate group. We do not list individuals as hate groups, only organizations."

It adds, "The organizations on our hate group list vilify others because of their race, religion, ethnicity, sexual orientation or gender identity – prejudices that strike at the heart of our democratic values and fracture society along its most fragile fault lines."

The SPLC's definition is similar to the FBI's criteria for hate crimes: "[A] criminal offense against a person or property motivated in whole or in part by an offender’s bias against a race, religion, disability, sexual orientation, ethnicity, gender, or gender identity."

The SPLC defined "groups" as having members who pay dues or make donations or participate in meetings and rallies. But the organization notes that many groups decreased in-person activity because of the pandemic, and also noted a crackdown of social media companies like Twitter and Facebook kicking groups off their platforms, forcing them into secret, encrypted text message groups and other alternative forums.

The report notes the Ku Klux Klan appears to be collapsing. According to the report, last year Klan chapters shrunk to 25, down from 47 in 2019, while in the past, there were typically about 150 chapters in a given year. But in the shadow of the KKK new groups have emerged, including the Proud Boys, who vandalized historically Black churches in Washington, D.C., during a pro-Trump demonstration in December. According to a recent report from the Wall Street Journal, the Proud Boys were "key instigators" in the Capitol riot.

"Hate groups tear at the fabric of our society and instill fear in entire communities," the SPLC says on its website. "American history is rife with prejudice against groups and individuals because of their race, religion, disability, sexual orientation or other characteristics. As a nation, we've made a lot of progress, but our history of white supremacy lingers in institutional racism, stereotyping and unequal treatment of people of color and others. Hate also plays a particular role in crime and thus the existence and location of hate groups is important to law enforcement. The U.S. Department of Justice warns that hate crimes, more than any other crime, can trigger community conflict, civil disturbances and even riots. For all their 'patriotic' rhetoric, hate groups and their imitators are really trying to divide us; their views are fundamentally anti-democratic and need to be exposed and countered. We also want to hold law enforcement accountable to combatting hate groups and taking their activity seriously."

The SPLC identified 25 hate groups in Michigan. They are:

• The Base
White Nationalist
statewide