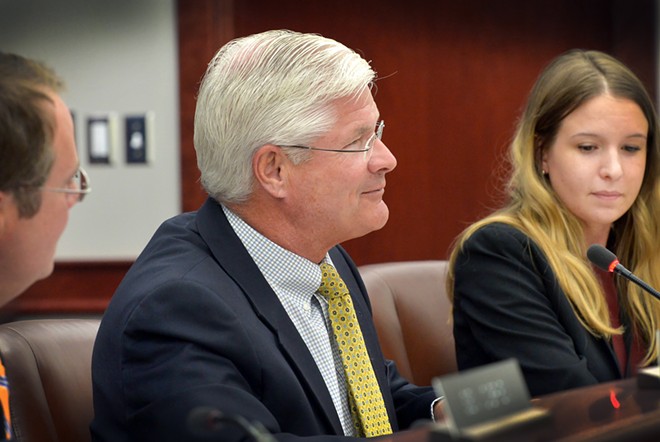 At a tense, video-recorded meeting at a diner last week, county party members hurled insults at Shirkey for not taking a more hardline position in Lansing.

Dare Wisely, chairman of the county party, said, “We’re not going to go along to get along. We’re done with it, Mike.”

Shirkey responded, “If you want to bully, go ahead and bully.”

Wisely fired back, “I call you a pussy if you call me a bully."

When warned about the upcoming censure vote, Shirkey said, “I don’t give a shit. ... I don't care.”

The party’s executive board voted 14-5 to censure Shirkey.

The party also excoriated Shirkey for calling armed protesters who stormed the state Capitol in April “a bunch of jackasses.”

At the meeting in the diner, Shirkey encouraged one of the party members to test the constitutionality of the ban.

"Carry in your long gun now and test it," Shirkey said.

According to the Hillsdale GOP, the other allegations against Shirkey are:

• Open support of the termination of the electoral college, one of the most important checks and balances that protect our Republican from democratic mob rule.

• Complete and utter surrender to Governor Gretchen Whitmer in regards to her unconscionable and unconstitutional shutdown of small businesses.

• The condemnation of peaceful protesters at the Capital, publicly declaring them “a bunch of jackasses.”

• Proclaiming those who peacefully exercise their right to open carry at the Capitol should be “handcuffed, finger printed, and given a long-standing photo they can frame at home.”

• Actively working against patriotic candidates in district he does not live in.

• Working openly behind the scenes to repeal and terminate Michigan’s Constitutionally passed and enacted term limits laws for the State Legislature.