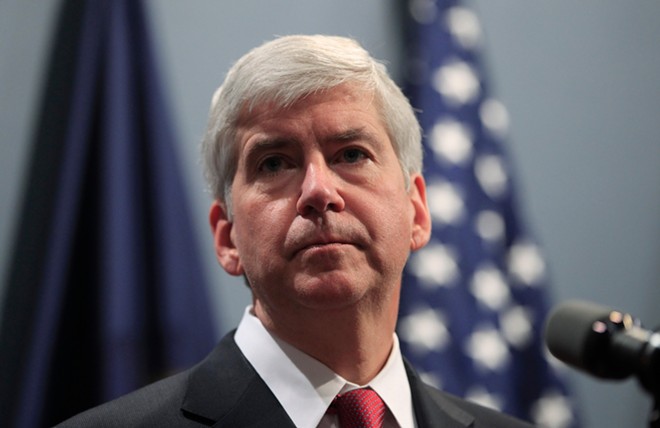 Attorneys representing Michigan's former Governor Rick Snyder, charged with two misdemeanors as part of a years-long investigation into the Flint water crisis, are arguing that their client cannot be charged because "Neglecting a city is not a crime," according to a court filing on Monday.

"Neglecting a city is not a crime — certainly not one with which Governor Snyder has been charged," Snyder attorney Brian Lennon wrote in the filing. "Nor did Governor Snyder have any duties 'owed specifically to Flint.'"

Snyder's team also argues that the grand jury indictment was a procedural error because it came from Genesee County, and Snyder worked in Lansing in Ingham County.

"His alleged crimes were committed, if at all, from that location, not in the city of Flint or anywhere else in Genesee County," Lennon wrote, adding that Snyder's legal team believes charging him from there has to do with "reasons that almost certainly have much to do with attempting to tip the scales in their favor."

“It is clear the prosecution is desperate to keep this case in Genesee County. The State is now asking the Court to perform legal and logical gymnastics to cover for their fatal flaw of obtaining their charges in the wrong county. Rather than own up to their error and refile these two misdemeanors in Ingham County, they are doubling down by twisting facts, distorting case holdings, and ignoring Michigan Supreme Court precedent and longstanding grand jury practice.”


The filing comes ahead of a scheduled hearing Tuesday where Snyder's legal team will ask a judge to dismiss the indictment.

Snyder was charged in January for two counts of willful neglect of duty, which carry a punishment of up to one year in jail and a $1,000 fine. Eight others were also charged for alleged crimes for their part in the Flint water crisis.

The Flint water crisis led to at least 12 deaths (and possibly many more) due to an outbreak of Legionaires' disease, and the poisoning of tens of thousands more with exposure to lead.

Last year, the state of Michigan announced a $600 million settlement for Flint residents.

See related PDF Snyder_-_Reply_Brief.pdf
Stay on top of Detroit news and views. Sign up for our weekly issue newsletter delivered each Wednesday.