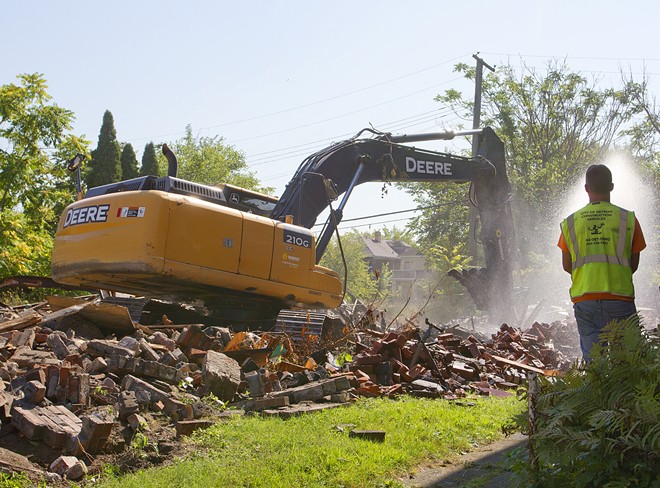 The owner of an asbestos company that did work for Detroit Land Bank’s demolition program is expected to be charged Wednesday with bribery, money laundering, and other felony counts.

Kevin Woods, owner of BBEK Environmental and a Harrison Township resident, faces up to 20 years in prison.

The 50-year-old subcontractor is accused of withholding money from the state, bribing a contractor to secure work, and violating state laws that require post-abatement air monitoring to be done by an independent entity.

The Michigan Attorney General’s Office alleges Woods bribed Aradondo Haskins with money to obtain contracts with Haskins’ former employer, Adam Group, a large demolition company. Haskins, a former field operations manager for the Detroit Building Authority, was sentenced to one year in prison in September 2019 for accepting $25,500 in bribes.

Woods also is accused of violating state laws that require abatement contractors to be independent from air monitoring companies.

The Detroit Building Authority suspended Woods from doing work for the city in July 2019.

“While the complexities of this alleged financial crime cannot go unnoticed, I am grateful for the thorough work performed by my prosecutors and those at the Office of the Special Inspector General for the Troubled Asset Relief Program (SIGTARP),” Attorney General Dana Nessel said in a statement. “Our laws on the checks and balances in asbestos removal provide safeguards for the public’s health and anyone who violates those regulations puts our residents in harm’s way.”

“There is no room for corruption in federally funded demolitions,” Romero said. “The law requiring that air quality monitors must be independent from those who remove asbestos and other hazardous materials is critical to protecting the health and safety of Michigan communities. SIGTARP commends Michigan Attorney General Nessel for standing with us to charge this alleged violation of this law combined with bribery.”