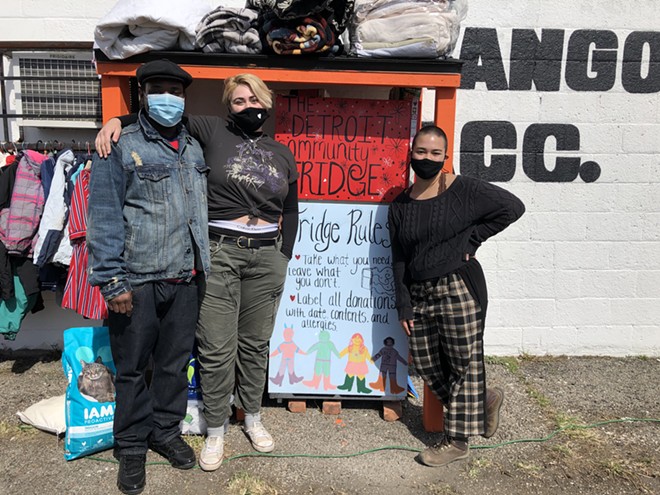 In the side lot of the longstanding business Hats Galore & More on Detroit's east side, there's now a free-to-use refrigerator and pantry accessible to all in the community. A colorful, hand-painted sign that festoons the fridge invites people to "take what you need, leave what you don't."

The fridge was set up with the help of Kazza Kitchell of the mutual aide organization Detroit Community Fridge. The organization is following the lead of similar community fridges that began to appear in Europe in the 2010s, and have spread across the U.S. during the COVID-19 pandemic.

"It's a take what you want, leave what you can kind of thing," Kitchell, who also goes by "Kitchen," tells Metro Times. ("I love to cook," Kitchell says of the nickname. "It's like my love language is giving people food and cooking with people, and just sharing a meal. It's super communal.")

Kitchell says the idea follows the first Detroit Community Fridge, which was set up in August in Southwest Detroit near the Rocky's Road Brew food truck by Wayne State University students Alyssa Rogers and Emily Eicher. The fridge at Hats Galore & More was first set up in January, and on Saturday, the group threw a barbecue with DJs and a pop-up clothing shop to help raise visibility. The same day, they also moved the Southwest Detroit Community Fridge to a new location near Santos Church 1t 1953 Military St., where it will hopefully serve more people.

"I live around the corner, so I was kind of heading the east side location, trying to find a spot since we had a lot of our capacity in the Southwest location," Kitchell says. "So I really just drove around, looking for local businesses that look like they've been in the community for a long time."

That's when Kitchell called up Ryan Yeargin of Hats Galore & More, a family business that has been running at its Gratiot Avenue location since 1993. Yeargin says it was a "no-brainer" — his father, known affectionately as Bob "The Hat Man," was recognized for his support for his community and had just died in January.

"It was something that I could see him doing," Yeargin says. "He was big in the community. People would come to me, daily, weekly, saying, 'I knew your father wouldn't let me go hungry.' He would give them jobs and things like that, you know, if they needed money."

Kitchell says they source the Detroit Community Fridge's offerings from other local mutual aid organizations, including Eastside Mutual Aid and Georgia Street Community Collective. They also take donations from businesses like the Planted Detroit urban garden and Rose's Fine Foods diner, which dropped off some cakes.

Rogers says they started the first Detroit Community Fridge because of the disruption caused by the pandemic — both to the community and their own lives.

"I think it's a combo of the need exacerbated by the pandemic, and to us personally, me and the other founder, Emily, having more time because usually we're in school full-time and working full-time, but I was actually not physically going into my job," she says. "People were losing their jobs, not having the money to pay for food. People were losing their benefits, like their Bridge cards and things. So there was definitely a need for food, and there's always been a food insecurity in Detroit having access to fresh produce."

Kitchell says the Detroit Community Fridge also addresses problems with access to healthy food that existed in Detroit before the pandemic.

"There are so many food deserts, and not a lot of people with transportation in Detroit," Kitchell says. "So something that's really important in this fridge is getting produce and otherwise just healthy food that otherwise might be inaccessible."

Finding a business partner with a side lot was important so the fridge would be accessible to the public 24/7. Kitchell says they also have plans to build a community garden and a structure that could house free coats and clothing for people to take as well.

Kitchell says other mutual aid organizations including Food Not Class and the Michigan Mutual Aid Coalition also helped. "There was no one person who made this all happen," Kitchell says. "This was a collective effort of all the different mutual aid groups in the city."

Kitchell says mutal aid organizations like Detroit Community Fridge are different from charities because they are from within the community, and not a wealthy, outside organization. "This is not about doing things for the community from the outside," Kitchell says. "It's about being a part of the community and recognizing what skills and what resources we already have available to us."

"It's actually for everyone," Kitchell says. "It eliminates waste. We've got a lot of food waste, a lot of stuff going to landfills, that is otherwise perfectly fine."

The group says they hope to set up more Detroit Community Fridges across the city soon.

"We've got a whole list, maybe eight prospective fridges, and maybe four or five of them are ready to go in the next month," Kitchell says.