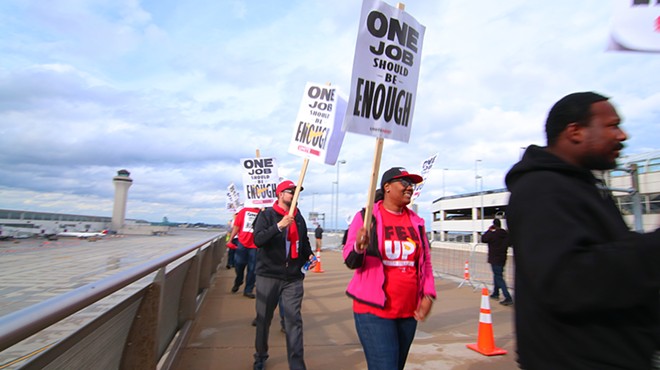 Just before Christmas, employees of LSG Sky Chefs, the unionized catering contractor for Delta's Detroit terminal, were told they were going to soon be out of a job. The airline announced it was switching its longstanding contract with LSG Sky Chefs to a non-union company, the Austria-based DO & CO.

The news came as a shock to many of the workers. Delta, like other corporations, received federal coronavirus aid — at least $5.5 billion at the time, and a total of more than $8 billion including President Joe Biden's latest relief package — in part to prevent people from losing their jobs during a pandemic. DO & CO also received at least $11 million in federal funds.

Now, hundreds of union workers face unemployment — and a loss of healthcare.

"They wanted everybody to reapply for the same job, but not guarantee they have a job," Shandolyn Lewis, an employee of LSG Sky Chefs for about nine years, tells Metro Times.

Delta's contract with LSG Sky Chefs terminated on Monday. Lewis reapplied for her job months ago and is still waiting to hear if she'll be rehired.

According to Lewis's union, UNITE HERE Local 24, as of last year LSG Sky Chefs employed 500 workers in its kitchen at Detroit Metropolitan Wayne County Airport. It laid off at least 200 workers before the contract was terminated, and of the remaining 300, DO & CO rehired at least 100, but about 140 are still waiting to hear their fate.

Some have been working for the company, which unionized more than 30 years ago, for decades.

Meanwhile, earlier this month, Delta said it would pay bonuses to managers who received pay cuts during the pandemic, ranging from thousands of dollars to six figures. The bonuses were not extended to frontline workers.

While DO & CO held a "meet and greet" earlier this year for then-current LSG Sky Chefs workers, the union has since learned that DO & CO hired employees off the street while its workers were still waiting to hear back.

Jackie Kaifish, the union's airport director who has worked at DTW since 1983, says she wishes DO & CO retained all LSG Sky Chefs workers and maintained their wages and benefits.

"What we're asking is that it should be a seamless transition," she says. "These workers should be the first folks getting hired, and maintaining their benefits, not going lower."

She adds, "They've worked through COVID for this past year and risked their lives. We haven't had outbreaks in the kitchen. We know how to do the job safely. Why in the world have you not give us any information other than the runaround?"

Workers say they couldn't get DO & CO to give a straight answer on pay rate or benefits for rehired employees. (While working on this story, we learned that DO & CO was offering drivers a starting wage of $19 per hour based on experience from reading an ad the company took out in this week's Metro Times.) And it's not just about maintaining wages. "A lot of our folks have decades out there, who have like 240 hours of sick time, and they have three weeks or more of vacation time," Kaifish says.

A DO & CO spokesperson tells Metro Times that its Detroit workers will receive increased pay and benefits, including an increase of up to 20% in minimum hourly wages, and coverage of 85% of employees' health insurance premiums, "an increase of 15% that will potentially save employees thousands of dollars per year," they say. The spokesperson also says the company will match or improve PTO at all levels of seniority, and increase the number of recognized holidays.

In a statement, Delta tells Metro Times that the airline "partners with a number of third-party vendors to provide exceptional service to customers," spokesperson Morgan Durrant says. "We selected DO & CO for its strong customer performance and operational reliability, along with the increased pay and benefits offered to employees — up to 35% higher than prior vendors – which aligns with Delta's high expectations for service and our core values of treating people well."

But the union contends that its workers, who provide Delta passengers beverages and snacks on flights, have in fact helped provide the airline with exceptional service. In fact, earlier this month, DTW won an award for its customer experience, even amid the pandemic.

"We are an unseen, but very needed, segment of the airline industry," Lewis says. "When we had a snow storm, people showed up to work. If they hadn't, those planes would have been grounded."

Instead, she says, the workers have been treated callously by their longterm employer — and left in limbo. A majority of the workers in LSG Sky Chefs' kitchen were Detroiters, people of color, and immigrants.

"Every single worker should have known when they were getting hired months, weeks ago," Lewis says.

"That is a slap in the face," she says. "In my opinion, Delta doesn't like unions. The reason we have unions is because corporations like Delta treat are not trying to treat the people with respect."

She adds, "These workers are human beings who have families. We're not numbers on a page. We are human. ... These are human lives and you're putting them out during a pandemic without healthcare."