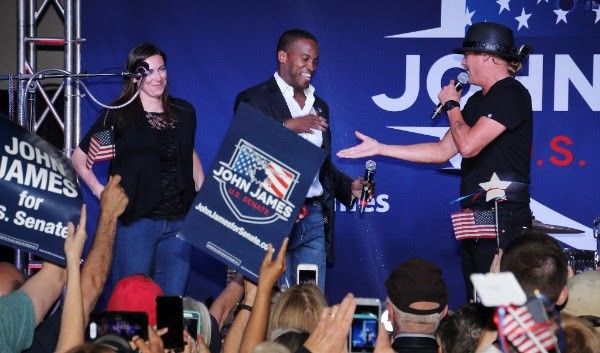 After running two formidable yet failed campaigns for the U.S. Senate, Republican John James is reportedly considering a run for governor of Michigan.

According to The Detroit News, which cited sources close to the situation, the the 39-year-old military veteran and businessman from Farmington Hills is one of several possible candidates to recently meet with representatives from the Republican Governors Association for the November, 2022 election.

James, who outperformed expectations during his unsuccessful campaigns against Democratic Senators Debbie Stabenow and Gary Peters, is certainly one of the highest-profile potential candidates, frequently appearing on Fox News. Conservative radio host Tudor Dixon and metro Detroit businessman Kevin Rinke also met with representatives from the Republican Governors Association, according to The Detroit News.

It would be another steep battle for James, though. According to a Feb. 3-6 poll by the paper, Governor Gretchen Whitmer had a 58% approval rating, with 39% saying they would support her for reelection and 20% saying their answer depended on the candidates.

The James-Peters race was the most expensive in Michigan history, as both parties fought for control of the U.S. Senate in a national race that wound up being way closer than expected. James lost to Peters by just two percentage points, but outperformed Donald Trump in Michigan, including in the bellwether of Grand Rapids' Kent County, a typically Republican stronghold where people chose James over Peters, yet Joe Biden over Trump.

Another businessman named Austin Chenge has also announced his intentions to run against Whitmer, but his campaign is kind of a hot mess, to say the least.