Increasing number of Detroiters say they’re likely to get vaccinated, but skepticism remains

About 38% of Detroiters now say they are “very likely” to get a COVID-19 vaccine, a significant increase from 14% in the fall of 2020, according to a new University of Michigan survey.

Detroiters who say they are “not at all likely” to receive a vaccine declined from 38% to 25%, U-M’s Detroit Metro Area Communities Study (DMACS) found.

Michigan health officials are hoping at least 70% of the state’s population gets vaccinated in order to reach herd immunity.

The survey found that Detroiters are most motivated to get vaccinated to protect themselves, their families, and their community. The least important factor is whether other people are getting vaccines and where the doses are made.

“DMACS allows us to track how Detroiters’ attitudes about the COVID-19 vaccine have changed over time,” Jeffrey Morenoff, a U-M professor and one of the leading researchers, said in a statement. “Knowing what factors drive their decision making on whether to get the vaccine can inform public health efforts.”

About 17.6% of Detroiters 16 years and older have received at least one dose of the vaccine. That’s compared to 33% in Oakland County and the rest of Wayne County, 27.4% in Macomb County, and 31.2% statewide.

Research has shown that African Americans are disproportionately skeptical of vaccines, due to the history of cruel and unethical medical experiments on Black people. Medical schools used the bodies of enslaved Black people for anatomy dissections. Black women were sterilized and used for gynecological research. And then there was the Tuskegee syphilis study, a secret experiment conducted by the U.S. Public Health Service to analyze how the deadly venereal disease progressed. Hundreds of Black men were recruited between 1932–1972 and never told they had syphilis, depriving them of life-saving treatment.

To boost confidence in the safety of vaccines, health officials and Mayor Mike Duggan’s administration have launched a campaign to show that vaccines have received enormous scrutiny and that reactions to the shorts are tracked regularly to ensure they’re safe. Clinical trials have shown vaccines are 95% effective and have modest side effects, if any at all. Side effects include short-term fever, muscle soreness, cough, fatigue, and headaches.

Duggan on Monday announced that vaccines are now available to all Detroiters and anyone who works in the city and is 16 years or older.

COVID-19 cases are increasing in Detroit and Michigan. The rolling seven-day average for new cases statewide reached 4,626 on Saturday, the highest since late December. Hospitalizations also are on the rise. 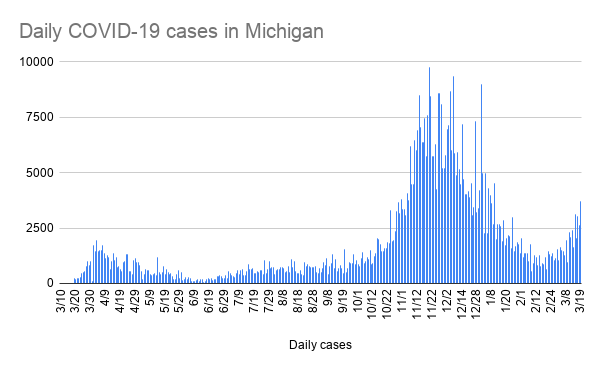