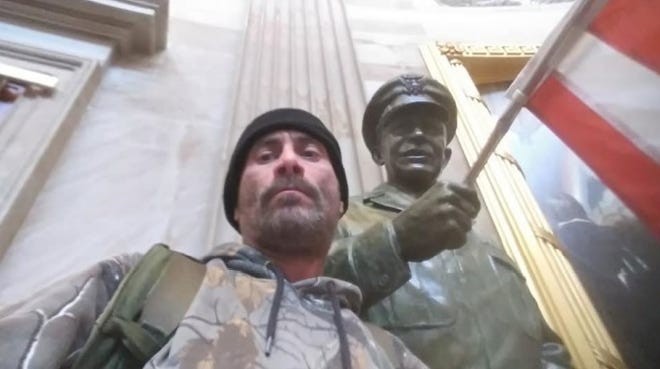 A Southgate man who called the deadly Jan. 6 insurrection “the proudest day of my life” is the sixth Michigan resident arrested for allegedly storming the U.S. Capitol.

Anthony Robert Williams, 45, bragged on videos posted on Facebook that he “stormed” the Capitol, “pushed back the cops,” and “took this fucking building,” according to the FBI. He also posted selfies while inside the Capitol.

Williams was charged with obstruction of official proceedings, entering a restricted building, and disorderly conduct.

He was arrested Friday and released from jail.

On Sunday, Williams posted a cartoon of a Trump supporter lifting the dome of the Capitol and asking House Speaker Nancy Pelosi, former Vice President Mike Pence, and Republican Senate Minority Leader Mitch McConnell, “Can you hear us now?”

Before the insurrection, William wrote on Facebook that he planned to travel to Washington D.C. to “storm the swamp,” according to the FBI. He also wrote, “We pissed and we comin to congress.”

After the riot, Williams wrote that the insurrection “was the proudest day of my life” and that he “felt like the founding fathers were smiling down on us in that room,” according to the FBI.

“I guarantee my dad and gramps, both vets, would be proud,” he added.

Like many Trump supporters, Williams has repeatedly posted false and discredited information about election fraud and the coronavirus.

Karl Dresch, of Calumet, was the first Michigan resident charged in connection with the Jan. 6 riot. He was arrested on Jan. 19 and charged with storming the Capitol.

Two Macomb County men – Daniel Herendeen, 43, of Chesterfield Township, and Robert Schornak, 39, of Roseville – were charged on March 18 for allegedly storming the Capitol.

All six Michigan residents charged in connection with the riot were Trump supporters.

The FBI has arrested more than 300 people for participating in the violent riot, which killed five people, including Capitol Police Officer Brian Sicknick.