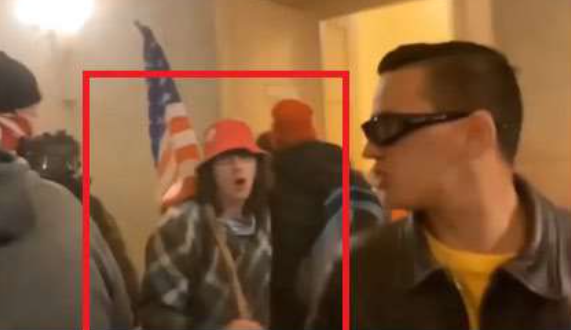 A 25-year-old Taylor man who admitted in media interviews that he had entered the U.S. Capitol during the Jan. 6 insurrection was arrested Tuesday for participating in the deadly riot.

Wearing a wide-rimmed Trump 2020 hat and carrying an American flag attached to a tree branch , Caplinger scaled a wall at the Capitol before roaming the halls of the building, according to videos and photos in an 11-page court filing.

Included in the evidence were social media photos and an interview with MLive.com in which he admitted he wandered around the Capitol.

“I was just looking around. I heard people smashing, kicking the doors,” he told MLive.com.

“There’s glass, there’s blood, there’s urination. I don’t even want to know what that brown stuff is,” he said.

Caplinger said he had second thoughts when he saw “officers coming up with their guns drawn.”

Five people died, including Capitol Police Officer Brian Sicknick, and 140 officers were injured during the riot.

The FBI arrested more than 300 people for participating in the insurrection.

Karl Dresch, of Calumet, was the first Michigan resident charged in the riot. He was arrested on Jan. 19 and charged with storming the Capitol.

Two Macomb County men – Daniel Herendeen, 43, of Chesterfield Township, and Robert Schornak, 39, of Roseville – were charged on March 18 for allegedly storming the Capitol.

All seven Michigan residents charged in connection with the riot were Trump supporters.