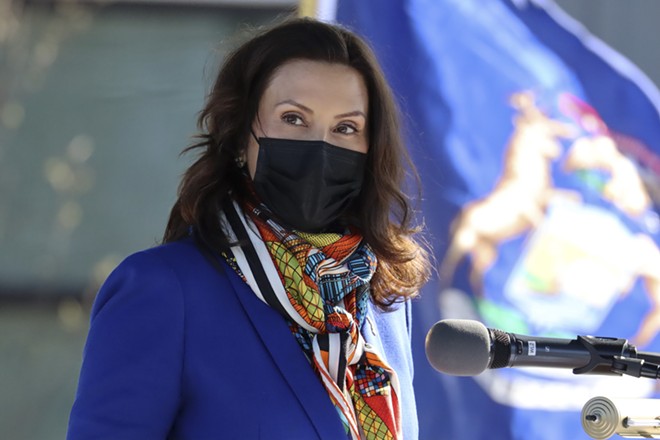 Governor Gretchen Whitmer is stuck between a rock and a hard place. On the one hand, COVID-19 cases are surging here after indoor dining at restaurants and youth sports returned in February, with Michigan now reporting the worst outbreak in the nation. On the other hand, more than a year into the pandemic, many Michigan residents and businesses have grown weary of restrictions, and some are outright defying the existing guidelines. (Not to mention those FBI-thwarted domestic terrorists who plotted to murder her, calling her a "tyrant.")

But even if Biden obliged, experts say that Michigan can't just vaccinate its way out of this surge. On Monday, Dr. Rochelle Walensky, director of the Centers for Disease Control, urged Whitmer to shut the state down again.


"When you have an acute situation — extraordinary number of cases like we have in Michigan — the answer is not necessarily to give vaccines," Walensky said during a White House briefing on Monday. "In fact, we know that the vaccine will have a delayed response. The answer to that is to really close things down."

She added, "If we try to vaccinate our way out of what is happening in Michigan, we would be disappointed."

Sending vaccines to Michigan would be akin to playing a giant game of Whack-a-Mole.


"We need that vaccine in other places, she said. "If we vaccinate today, we will have impact in six weeks and we don't where the next place is going to be that is going to surge."


Dr. Abdul El-Sayed, an epidemiologist who ran for governor against Whitmer in 2018, agrees that the solution is to shut things down again rather than calling for more vaccines, explaining why in his newsletter, "The Incision."

The problem is that epidemiologists say to reach "herd immunity" from the virus, at least 75% of the population needs to be vaccinated. In Michigan, that’s roughly 7.5 million people. We're only about 25% there, meaning another 5.2 million residents need to get vaccinated.


But even if Whitmer was able to increase the number of vaccinations from 100,000 a day to 200,000, it would still take 57 days to reach herd immunity, according to El-Sayed's breakdown of the math. That's because the CDC called for a pause on the single-dose Johnson & Johnson vaccines on Monday to review data after a small number of people developed blood clots, meaning we would have to use the two-dose Pfizer shots — which require 21 days between doses. It also takes an additional 10 days after the second dose to develop the antibodies.

That also assumes everyone who was eligible was willing and able to get vaccinated, but vaccine hesitancy remains a problem, fueled by mistrust of government and misinformation.

Dr. Joneigh Khaldun, the state's chief medical executive, said in a Friday news conference that the surge was on track to be "even greater than the one we saw in the fall."