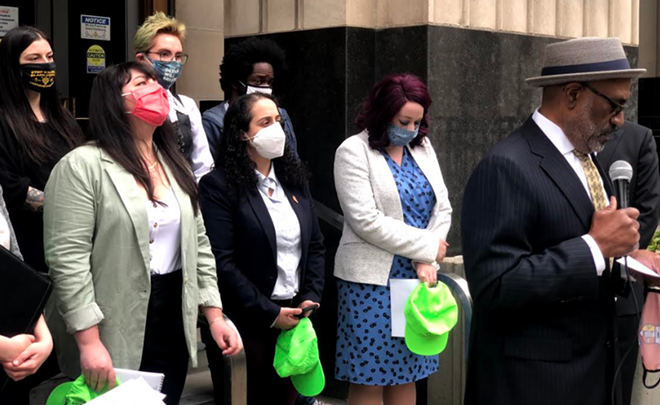 Five legal observers are suing the City of Detroit, Mayor Mike Duggan, Detroit Police Chief James Craig, and others, saying the police violated their civil rights by attacking and arresting them while they were documenting Detroit's anti-police brutality protests last summer.

The legal observers are from the National Lawyers Guild, an organization of lawyers and legal workers that provides support for social justice movements. The legal observer program has existed since 1968, and they're easily identifiable by their neon green hats. The group was seen at more than 100 of the anti-police brutality protests held throughout Detroit last summer following the death of George Floyd by Minneapolis police.

The lawsuit, filed earlier this month, seeks at least $75,000, and was amended Monday to seek injunctive relief that would prevent further harm against the observers.

"Plaintiffs want to monitor police interactions with activists, record arrests, and report unlawful behavior during these protests without being exposed to the excessive force and 'non-lethal' weapons regularly deployed by Defendants during these activities," the suit states. "Plaintiffs fear for their safety from Defendants’ violence because they have been attacked and injured repeatedly and without warning while attempting to monitor, record, and report during public demonstrations and protests. Plaintiffs also fear unlawful arrests from Defendants because they have been subjected to arrests without probable cause for simply monitoring interactions, recording, and reporting unlawful police behavior during public demonstrations and protests."

The suit adds, "Given the degree of risk that carrying out duties of a legal observer presents, many would-be legal observers, including Plaintiffs, chose not to legally observe at some protests and demonstrations, or leave earlier than they wish to, for fear of being arrested or hurt and not having access to medical care in the likely event that police hurt them."

During a press conference on Monday in front of Detroit's U.S. District Court, the plaintiffs and their legal counsel detailed the alleged abuse, including being tear-gassed, struck with batons and riot shields, and other instances of excessive force.

"Without any lawful justification or excuse, my clients were viciously attacked by Detroit police officers for no other reason than them being legal observers," said David Robinson, the attorney for plaintiffs Emma Howland-Bowlton, Shannon McEvilly, Marie Reimers, Sara Habbo, and Clarissa Grimes.

"I have legal observed for six years, observing demonstrations across the country," Reimers said. "I have never seen anything like I saw this summer in Detroit."

Reimer said she was beaten and gassed multiple times throughout the summer, and says she suffered "long-term physical health consequences" because of the attacks.

The group was also joined by members of Detroit Will Breathe, the leaders of Detroit's anti-police brutality protests.

"The legal observers’ lawsuit against the City is an important defense of constitutionally protected activity that is fundamental to the protection of the freedom of assembly and democratic expression of dissent," Detroit Will Breathe co-founder Tristan Taylor said. "The fact that this legal action is necessary speaks to the problematic practice of DPD and the City of Detroit who consistently avoid accountability and transparency."

"The lawsuit's plaintiffs are all active, trained Legal Observers and dedicated members of our organization," Julie Hurwitz, Vice President of the National Lawyers Guild Detroit and Michigan Chapter, said in a statement. "We are tremendously proud of the actions they have taken to hold the city of Detroit and its police department accountable and ensure that impartial, non-participant Legal Observers may continue the work they’ve done for more than 50 years ensuring citizens may exercise their First Amendment rights without unconstitutional interference."

The press conference was held amid clashes between police and protesters in Minnesota following the death of Daunte Wright, an unarmed 20-year-old Black man, by an officer who claimed to mistake her gun for a Taser. That incident happened in Brooklyn Center, not far from Minneapolis, where officer Derek Chauvin is now on trial for the death of Floyd.