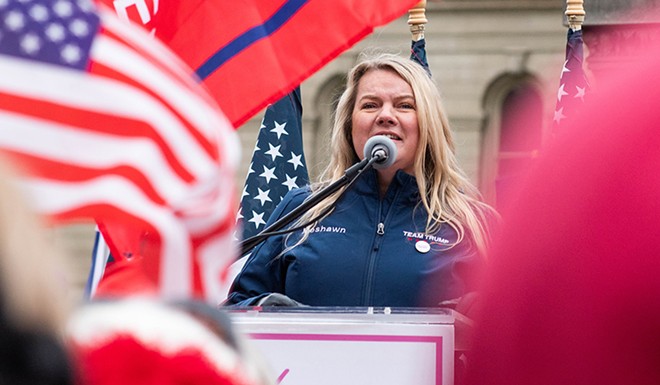 A hard-right group founded by state Rep. Matt Maddock and his wife Michigan Republican Party Co-Chair Meshawn Maddock continues to spread misinformation about the 2020 election and is falsely claiming that the Jan. 6 insurrection was staged.

“As a threat loomed in Congress of some courageous Republicans possibly revealing a stolen election on Jan. 6, Democrats AND Trump-hating Republicans implemented the whole fake horror show for the media: pre-planted bombs, unleashing chaos and violence with paid protesters in Trump attire, and a corrupt stand-down police force—all staged to seal Trump’s fate,” the Michigan Conservative Coalition posted on its Facebook page last week. “Tactics of Insane and desperate power hungry anti-American maniacs to keep truth and a stolen election under wraps.”

About five years ago, the Maddocks co-founded the Michigan Conservative Coalition, an influential collection of right-wing organizations and pro-Trump groups aimed at recruiting and training an "army of conservative activists." The mission of the coalition, which goes by the name of Michigan Trump Republicans, is to shift the state GOP further to the right.

In an interview with the far-right website Gateway Pundit on Sunday, Meshawn Maddock and the coalition’s spokesman Matt Seely downplayed the deadly riot, repeated false election claims, and voiced support for a package of bills that would make it more difficult to vote in Michigan.

Seely, a Grosse Pointe Shores councilman who came under fire in the past for objectifying women and mocking sexual assault victims, said the riot was not an insurrection because “not one person was arrested for wielding a weapon of any type," a blatantly false claim.

"What were they going to overthrow the government with – pitchforks?" Seely said.

Court records show alleged insurrectionists wielded stun guns, baseball bats, pepper spray, flagpoles, pipes, metal barriers, and a hockey stick. Capitol Police Officer Brian Sicknick died after he was sprayed with an “unknown chemical substance.” Four others died in the riot, and about 140 police officers suffered injuries, including cracked ribs, concussions, gouged eyes, shattered spinal disks, and a heart attack. That doesn’t include officers who will suffer from post-traumatic stress disorder and were likely infected with the coronavirus from unmasked Trump supporters.

Maddock helped organize and promote buses of supporters from suburban Detroit to Washington, D.C., for the rally. On the eve of the attack, Maddock delivered a speech to thousands of people, saying "over 19 buses" are headed from Michigan to Washington, D.C.

During the interview, Jim Hoft, the founder and editor-in-chief of Gateway Pundit, repeated discredited claims about the 2020 election.

“I believe Michigan is a red state, and I believe Trump won by a landslide there,” Hoft said.

Michigan Republicans are repeating false election claims to support a 39-bill package of bills that would curb voting access.

One of the bills would require voters to attach a copy of their photo ID to apply for an absentee ballot, a move that “serves no other purpose than to make it harder for citizens to vote by mail,” Michigan Secretary of State Jocelyn Benson said during a press conferences last week.

“The only reason you wouldn’t want voter IDs is if you got millions of illegal people voting and they can’t identify themselves,” Seely said. “That’s the real issue.”

Maddock, who complained that she’s “been called a racist,” suggested Nike should give away free shoes to Black Lives Matter supporters so they don’t burn down stores.

“Place your order online, type BLM in your discount code, and they should just ship their merchandise for free to these people,” Maddock said. “It will actually save them money because they’re not going to have their stores looted and burned.”

Metro Times featured a cover story about the Maddocks in February as part of an ongoing series about the radicalization of the Republican Party.