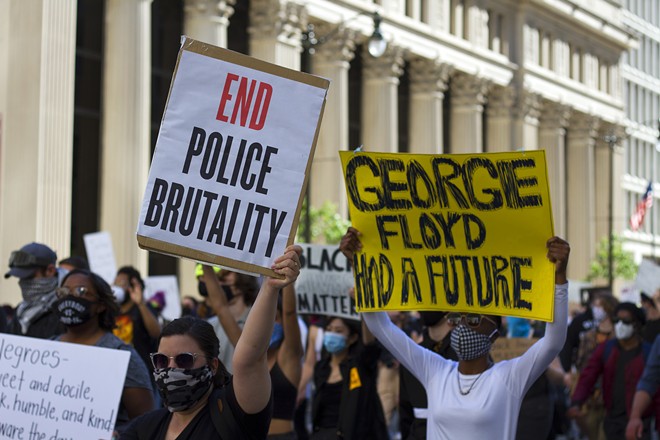 The proposals ranged from banning chokeholds and no-knock warrants to requiring de-escalation and anti-bias training.

Nearly a year has passed, and on Tuesday Minneapolis Police Officer Derek Chauvin was found guilty of second-degree unintentional murder, third-degree murder, and second-degree manslaughter charges after pressing his knee into Floyd's neck for more than nine minutes.

But lawmakers have failed to enact a single bill to reform policing, making Michigan one of only a handful of states that have not approved anti-police brutality legislation following Floyd’s death.

Now Democrats, including Gov. Gretchen Whitmer and Attorney General Dana Nessel, are renewing their push to improve police accountability and address racial bias in policing. The only problem: Republicans who control the state House and Senate aren’t advancing the legislation.

“In the wake of this verdict, I am even more focused on passing legislation to improve policing with: citizen oversight, demilitarization, better training, independent investigations of misconduct, and a law that revokes certification from officers that abuse citizens,” Sen. Jeff Irwin, D-Ann Arbor, who pledged in June to “change the culture of policing,” tweeted Tuesday.

Irwin sponsored a bill that would require incoming officers to train on implicit bias, de-escalation techniques, and mental health screening. The bill unanimously passed the Senate but stalled in the House.

Michigan Senate Democrats also introduced a package of police reform bills on Oct. 1 that would boost the relationship between law enforcement and social workers, create more opportunities to weed out bad cops, protect people who launch complaints about police, and make it a crime to call 911 with false, racially motivated allegations. The legislation has stalled.

In June, Whitmer unveiled a widespread plan to reform police, from proposing a ban on chokeholds to requiring independent investigations of officer-involved deaths. The measure would also limit no-knock warrants and require officers to intervene when they observe their colleagues using excessive force. Even though the plan was endorsed by the Michigan State Police and the Detroit Police Lieutenants and Sergeants Association, it also has stalled.

“After the tragic deaths of George Floyd and Breonna Taylor, Governor Whitmer immediately got to work with our state’s top community leaders and law enforcement officials to improve policing in a way that creates a more just and equitable law enforcement system,” Whitmer spokesman Bobby Leddy told Metro Times in a statement. “As our nation is renewing the calls for changes to police practices, Governor Whitmer is hopeful the legislature will work with her to reach agreement on commonsense reforms that will build a better system of trust and accountability.”

To track bad cops, Attorney General Dana Nessel proposed creating a statewide, publicly accessible database of officers who have committed misconduct. The registry is part of a seven-point plan designed to hold police more accountable and increase transparency so that problem cops can't go from city to city with impunity.

Under the plan, the Michigan Commission on Law Enforcement Standards would have the authority to strip officers of their licenses for misconduct, officers who commit felonies related to misconduct on duty would forfeit their retirement benefits, law enforcement agencies would be required to report use-of-force data and maintain disciplinary records for each officer, and police would be mandated to undergo de-escalation and implicit-bias training.

The Legislature has not acted on the proposals.

“It is incumbent upon the leaders of our communities, our state, and our nation to effectuate change,” Nessel said in a statement. “The murder of Mr. Floyd by a man who wore a uniform of those sworn to serve and protect cannot be allowed to pass as one more unfortunate moment in our nation’s history. We cannot simply be satisfied by a guilty verdicts. It must be a catalyst for change.”

“Our Black and Brown sisters and brothers are still not safe in America,” Barnes said. “We need true reform to policing before real justice, not just accountability, is served."

Republican leaders in the state House and Senate did not return Metro Times’ calls for comment.