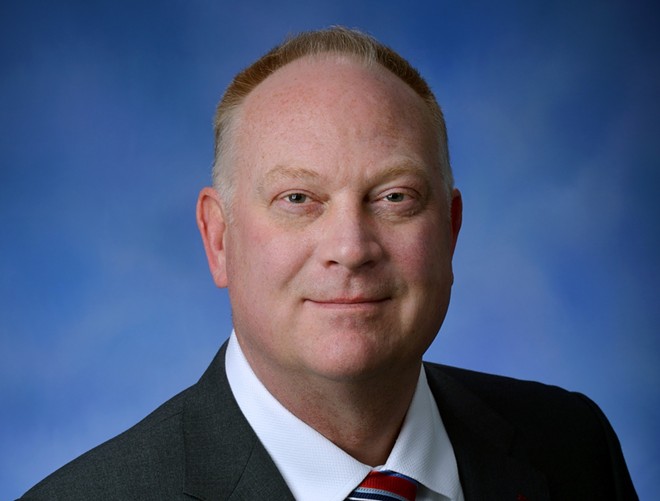 Michigan state Rep. Matt Maddock, who has repeatedly spread lies about election fraud and falsely said COVID-19 “is less lethal than the flu,” wants to make it harder for fact-checkers to challenge unsubstantiated claims by politicians.

Maddock, R-Milford, introduced a bill Tuesday that would require “fact-checkers” to register with the state and subject them to fines and lawsuits for "any wrongful conduct that is a violation of the laws of this state."

Maddock and his wife, Michigan Republican Party Co-Chair Meshawn Maddock, have lambasted fact-checkers for calling out false claims about election fraud and COVID-19.

“Who are these Fact Checkers? We’re going to find out,” Maddock posted on Facebook last week. “My legislation will put Fact Checkers on notice: don't be wrong, don't be sloppy, and you better be right.”

The Fact Checkers Registration Act defines fact checkers as people who publish print or online articles in Michigan, are paid by a fact-checking organization, and are members of the "International Fact Check Network,” a unit of Poynter Institute.

Fact-checkers who fail to register with the state would be fined up to $1,000 per day.

Last month, Maddock compared fact-checkers to the Gulag, a forced labor camp system that subjected millions of people to brutal conditions. Maddock posted a photo of himself on Facebook wearing a shirt that read “Goolag” in the style of the Google logo.

Maddock is a bail bondsman, early Tea Party organizer, and longtime grassroots activist, who was elected to the state House in 2018 and has become one of the most outspoken supporters of former President Donald Trump.

Three days after the general election, Maddock riled up a crowd of angry Trump supporters who descended on the TCF Center in downtown Detroit to disrupt vote counters. Earlier in the day, Matt Maddock falsely claimed on social media that 35,000 ballots "showed up out of nowhere" in the middle of the night and that Democrats "were pretty much cheating in front of poll watchers."

Maddock and his wife continued to peddle lies about election fraud and downplayed COVID-19.

Maddock made several attempts to overturn the election. In late December, he and Daire Rendon, R-Lake City, joined a federal lawsuit filed by Trump supporters to challenge the results of the election. The suit asked a judge to allow lawmakers to certify states' election results, a move that would enable the Republican-led Michigan Legislature to reject Biden's victory. But a judge turned down the suit, calling their arguments "flat-out wrong" and "a fundamental and obvious misreading of the Constitution."

On Jan. 5, a day before the insurrection, Maddock and 10 other Republican lawmakers from Michigan wrote a letter to Vice President Mike Pence, urging him not to certify the election, questioning "the validity of hundreds of thousands of ballots" in battleground states.

On the same day, Meshawn Maddock spoke to Trump supporters in Washington, D.C. After her speech, her husband, standing next to her, lifted his fist.