Victims of Midland-area flood are still struggling a year later 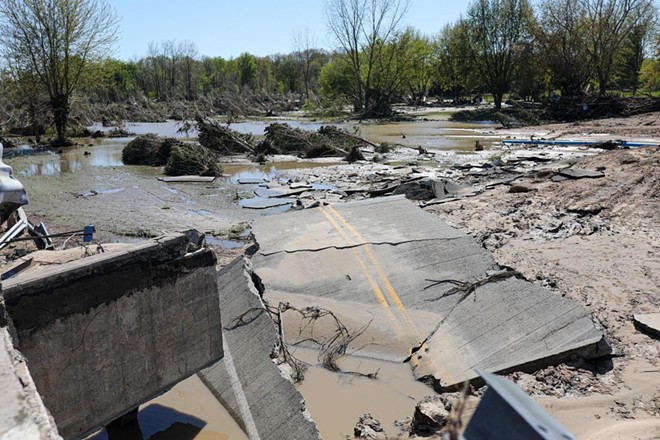 Mike Callan lost everything but his life when a dike at the Edenville Dam near Midland collapsed in May 2020 and unleashed a rush of water that displaced about 10,000 residents.

The ensuing flood turned roads into rivers and destroyed bridges, homes, and businesses. Callan’s two-story farmhouse, which he calls his “dream house,” was destroyed.

“Within a matter of minutes, it was gone,” Callan said. “I have nothing to show for it but a big debt.”

Callan and two other flood victims spoke out about their experience at a news conference Monday, two days before the one-year anniversary of the historic flood caused by the collapse of two dams.

Their attorney Ven Johnson said the thousands of people whose lives were upended by the flood will likely never receive compensation from the company that owned and operated the dams — Boyce Hydro Power — because it was granted bankruptcy protection last month.

Johnson also filed a lawsuit against the state of Michigan for allegedly failing to regulate the company and hold it accountable for serious safety violations that dated back more than two decades. In 2018, the Federal Energy Regulatory Commission (FERC) revoked the Edenville Dam operator’s license because the spillway wasn’t adequate to hold water during a historic flood.

“As it stands today, the case against the state of Michigan is currently in the Court of Claims and will not go to trial until 2024 at the earliest,” Johnson said. “Meanwhile, Michigan taxpayers are footing the legal bill with no end in sight. Our tax dollars should not be used to defend the government entities that failed thousand of mid-Michigan residents, but instead should be utilized to compensate the victims and rebuild the dams.”

Over the past year, more than 20 other law firms have filed state and federal lawsuits against Boyce and the state.

Johnson is urging state officials to soon reach an agreement with the victims so they can rebuild their lives.

“This cataclysmic governmental failure cries out for all of us to come together and utilize our collective energies to figure out the best way to fix the damns and provide a full measure of justice to our clients,” Johnson wrote in a letter to Gov. Gretchen Whitmer, Attorney General Dana Nessel, and U.S. Sens. Debbie Stabenow and Gary Peters on April 30.

“I couldn’t at my age spend two years or more to rebuild a house we absolutely loved,” Yockey said, his voice cracking with emotion. “We had wonderful neighbors who spent a lot of their time and money contributing to their community.”

Carl Hamann, a Sanford city councilman, said the flood has devastated his community.

“I lost everything,” he said. “Some of my stuff moved a half-mile down the road. We lost about 10% of our residents in Sanford and most of our businesses.”