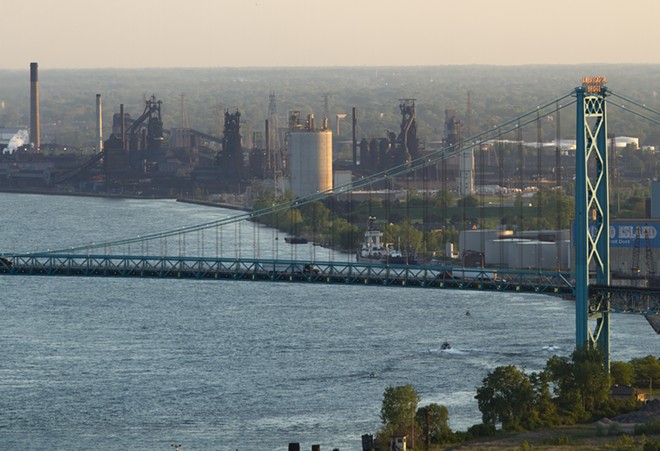 Detroit residents and environmental activists are urging City Council to adopt a new ordinance aimed at protecting the Detroit River from industrial polluters.

The ordinance is a response to a dock that collapsed and spilled contaminated soil into the Detroit River in southwest Detroit in November 2019. The company responsible for the collapse, Detroit Bulk Storage, was illegally stockpiling large mounds of gravel along the river without a permit.

Before the committee hearing, supporters of the ordinance, including city officials, called on the council to quickly adopt the ordinance to prevent another collapse.

“We must do more to protect our Great Lakes and drinking water sources. This ordinance does exactly that,” Justin Onwenu, volunteer organizer with the Sierra Club, said. “We’ve engaged with stakeholders across the city, and we’ve built consensus. Now is the time for the City Council to take action.”

The ordinance would increase oversight and accountability for businesses along the river by requiring them to maintain their properties, conduct environmental assessments of their land, and store material at least 150 feet from the shore. It also establishes penalties and enforcement actions and requires emergency management protocols in the event of contamination.

Under the ordinance, the city would be required to conduct regular inspections of companies operating along the river.

“We know who the bad actors are, and we’re working with them,” Parker said.

Parker said regular inspections will help the city achieve its goal of “prevention, protection and accountability.”

Raquel Castañeda-López, who introduced the ordinance, said the proposal is a critical “step towards environmental justice for Detroiters.”

“We have all seen the devastating effects of industry when it is not regulated and where there aren’t enforcements,” Castañeda-López said. “We are really taking lessons from Flint to prevent that kind of contamination. We know from hearing from residents that it is time put protections in place for our drinking water.”

The ordinance also would strengthen emergency response protocols in the event of another spill. When the dock collapsed two days before Thanksgiving, the public was unaware of what happened until The Windsor Star in Canada reported on the incident nine days later.

“We should have known a lot sooner, and we got lucky this time,” Raquel Garcia, executive director of Southwest Detroit Environmental Vision, said. “We need policies that both protect and inform residents so that we’re always aware of threats to our drinking water sources.”

The ordinance also would hold companies responsible for future contamination.

“The city of Detroit must set a strong standard for what it means to operate along the Detroit River, Eradajere Oleita, Detroit Organizer for the Michigan Environmental Justice Coalition, said. “If a business is reckless or refuses to make necessary repairs, that’s something that will negatively impact all of us.”