By Dave Mesrey and Eddie B. Allen Jr. 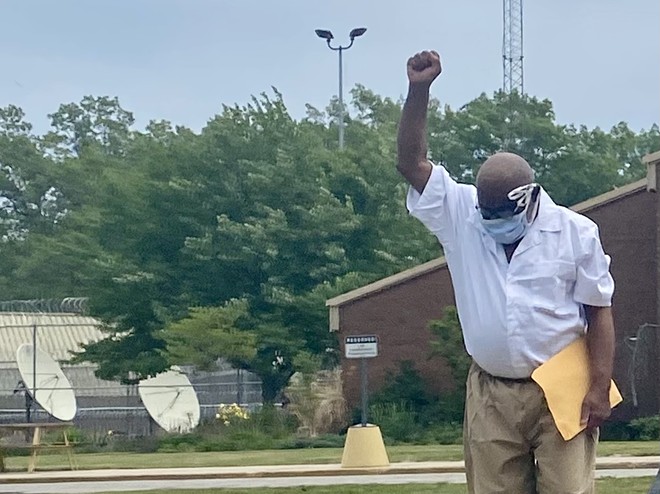 Four-time Golden Gloves boxing champion Ray Gray, the Detroit man who’s spent more than 48 years behind bars for a murder he’s insisted all along he did not commit, has been released from a state prison in Muskegon.

Van Houten then ordered Gray’s release on time served “in the interests of justice.”

In 1973, Gray, then a 21-year-old boxer contemplating turning pro, was convicted in the shooting death of 23-year-old Army veteran Reuben Bryant, an alleged heroin dealer, during the robbery of a Euclid Street apartment on Detroit’s west side.

Gray and his supporters have long maintained that he had nothing to do with the crime and that there was no physical evidence linking him to the scene, only what Innocence Canada calls “unreliable eyewitness identification.”

They maintain that the person who killed Bryant was a man named Charlie Mathews.

Shortly after 2 p.m. Tuesday, Gray, 69, walked out of prison to a joyous group of family and friends, including his wife, Barbara Rinehart-Gray, and his sister Phyllis Long.

“It’s one of the happiest days of my life,” Gray said. “I feel blessed and grateful for the people who made this happen — people of all races. Justice is often not only blind, but deaf, and you have to continue to touch it. People touched it and kept touching it, and now we’re here. … This time the system worked.”

Gray and his wife, Barbara, a former prison arts instructor, shared a tearful embrace with their family Tuesday afternoon in the shadow of the penitentiary.

“We've been disappointed so many times that it's hard to believe," said Barbara, who married Gray in a Saugatuck prison ceremony in 1985. 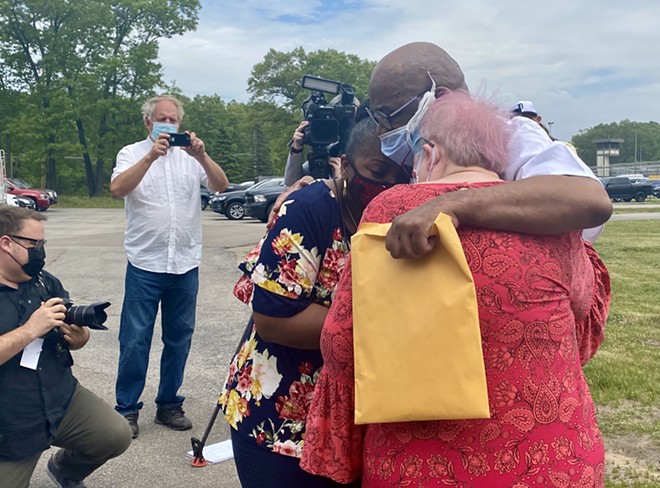 "It was so overwhelming to finally see him walk through those doors for good, at home to stay," Long said. "It feels great that this time is not a dream."

Gray says his no-contest plea, which is not an admission of guilt but is typically sentenced like a guilty plea, was his best chance for an immediate release.

"I feel like I'm making a deal with the devil," he said. "But right now my main concern is being free — most of my life I've been locked up."

Gray said his release from prison feels like he's leaving another planet behind and that he’s eager to rejoin a world full of advanced technology he never knew in the 1970s.

"But, that aside, I definitely feel good coming home," he said. "It's almost unbelievable."

Also an acclaimed painter, Gray said he plans to continue creating artwork. “Art was sort of like my salvation” in prison, he said.

“It’s much too long in coming,” said Gray’s longtime innocence advocate Bill Proctor. “But I’m so glad to have him standing here next to Barbe.”

“This is not an exoneration,” Wayne County Prosecutor Kym Worthy said in a statement. “However, this case does present many questions that cannot be answered.” Humanity for Prisoners founder Doug Tjapkes, a longtime advocate for Gray's innocence, expressed his disappointment with the terms of the plea deal.


“The state dodged a bullet by not having to shell out $2.4 million in wrongful conviction compensation," he said. "I’m so happy for Ray and Barbe, but it’s a bittersweet victory. Not even an apology.”

“I know that Ray would’ve preferred an exoneration,” said Gray's attorney Gabi Silver. “But at the end of the day, this is an opportunity for him to get out of prison and finally live some life.”

“I feel like a boxer whose corner has thrown in the towel, but he wants to fight on," Gray said. “The struggle continues.”

Related After almost 50 years behind bars, Ray Gray hopes his nightmare will soon come to an end: Praying for justice