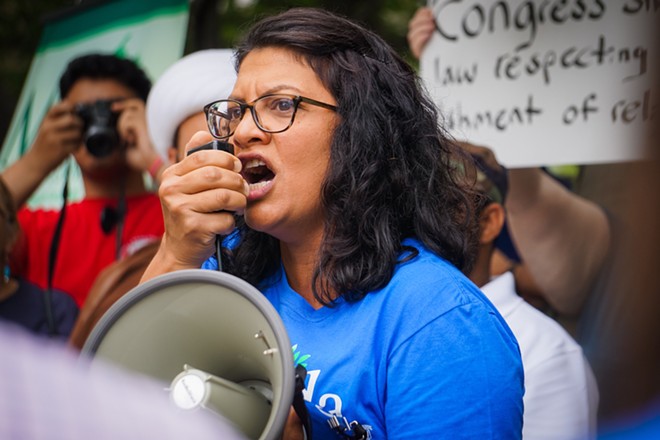 Rep. Rashida Tlaib sent a letter to social media companies accusing them of censoring Palestinian political speech on their platforms.

The letter, dated last week amid the 11-day violent conflict between Israel and Hamas, was sent to the companies that own Facebook (which also owns Instagram and WhatsApp), Twitter, and TikTok. Tlaib, the lone Palestinian American in Congress, shared the letter on Twitter Tuesday.

There is a disturbing double-standard in which posts/accounts sharing Palestinian perspectives are censored/restricted, but extremist Israeli groups are allowed to coordinate violent mob attacks on Palestinians. It must stop. https://t.co/ytaYe7INGT

"I write with urgent concern regarding reports of Facebook, Instagram, Twitter, and TikTok censoring content and disabling user accounts on your respective platforms that are raising awareness about recent Israeli state-backed violence on the Palestinian people," Tlaib wrote. "It is critical to ensure that your companies, whether intentional or unintentional, do not have algorithms and staff that silence people based on their ethnicity or religious affiliation."

She added, "With reporting in the mainstream media often ignoring and silencing Palestinian voices, social media has become a crucial source for information, pictures, and videos documenting the injustices that Palestinians face. Social media accounts have been some of the only places for Americans to access first-hand accounts of the occupation and violence from Palestinians on the ground. That is why these reports are particularly troubling — Palestinians often have nowhere else to turn to make their voices heard."

Tlaib wrote that her "email inbox has been filled with reports of your companies improperly removing and suspending posts and accounts highlighting Israeli apartheid and violence against the Palestinian people." A recent report from the nonprofit 7amleh said it had received more than 200 complaints about deleted posts and suspended accounts.

In response, Instagram and Twitter said the accounts were "suspended in error by our automated systems." But Tlaib said that was no excuse. "It is not enough to continue to blame technical errors by automated systems and algorithms," she wrote. "I know that these processes and systems have humans who create and maintain them; thus, biases are automated as well."

Tlaib knows how human biases can manifest as machine errors. In her hometown of Detroit, Tlaib came under fire for telling Detroit Police Chief James Craig that she worried the city's facial recognition software would misidentify Black people. In response, Craig called her "racist." But Tlaib was vindicated last year when a Black man revealed he had been unjustly arrested when the technology incorrectly flagged him as a shoplifting suspect. Later that year, another Black man came forward with a similar story.

In her letter, Tlaib also cited a New York Times report that found that Israeli extremists were using WhatsApp to coordinate mob attacks on Palestinians, which Tlaib called a "disturbing double-standard." Tlaib called on the companies to provide clarifications on their systems and standards for moderating content on their platforms.