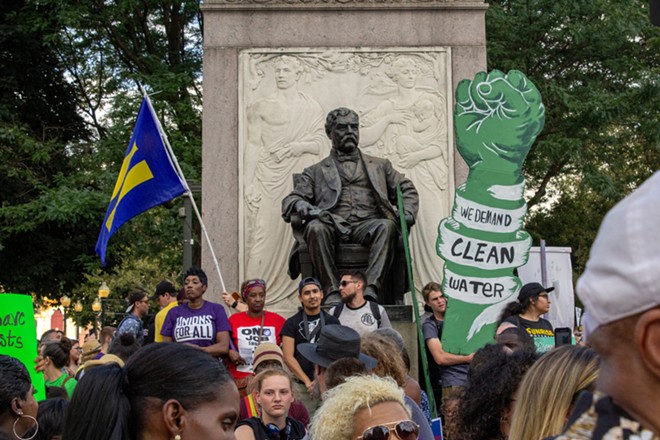 Environmental-justice advocates urged the federal government to invest in restoring the Great Lakes, confronting the climate crisis, and standing up for front-line communities.

Laura Rubin, director of the Healing Our Waters-Great Lakes Coalition, said investments are necessary. She noted toxic pollution continues to threaten the health of communities in Michigan and across the country.

While opponents said the plans cost too much, data from the Great Lakes Coalition showed Michigan alone needs more than $16 billion over the next two decades to modernize wastewater and drinking water systems. The Coalition pointed out in communities such as Detroit and Flint, residents don't have access to affordable drinking water.

The cost of water in many localities is based not on proximity to water but on quality of infrastructure.

Monica Lewis-Patrick, CEO and president of We the People of Detroit, said nearly 40% of the city's residents living in poverty choose between water bills, food, medicine and taking care of their children.

"The lack of federal investment in our water services has saddled communities like mine and others with debt and expenses for water infrastructure that they cannot afford," Lewis-Patrick asserted. "Those costs are being passed on to residents, and it's leading to exorbitant water bills and people cannot pay."

She pointed to research, which showed more than 35% of Americans will not be able to afford their water bill by 2022.

The Biden budget plan would increase funding for the Great Lakes Restoration Initiative by $10 million, and give the Environmental Protection Agency an extra $2 billion for greater oversight of polluters. Plus, the American Jobs Plan has $111 billion for protecting water quality over the next eight years.