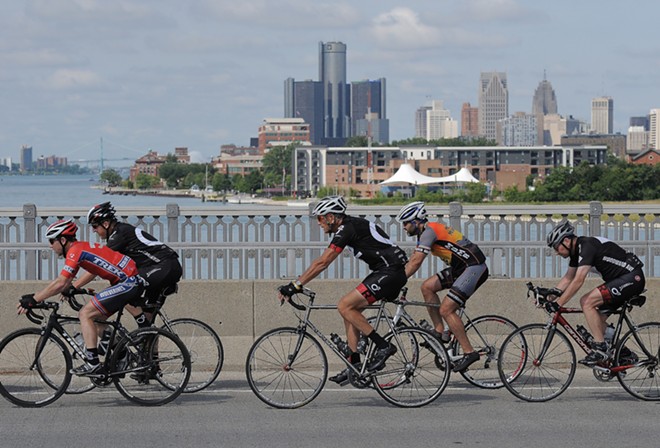 I am a resident of the city of Warren and a board member with Transportation Riders United. I also penned the letter that ran in the Metro Times asking Amazon to save the Michigan State Fairgrounds bandshell. I am so glad that they are working with the city and that it will get moved to Palmer Park. In my spare time, I also run the website transitguidedetroit.com to promote public transit use in and around Detroit. Although I don’t live in Detroit, I have an idea about how to spend some of the $400 million the city is going to receive from the CARES Act that would create more equity for Detroit’s bus riders and expand access to tourists.

Over Memorial Day, Belle Isle Park was closed due to capacity restrictions. Now there is a sign saying “expect island closures,” so this may be common all summer. I asked the Michigan State Police on Twitter what the park capacity limit was.

"There are currently 1800 legal parking spots," they responded. "Once the car count reaches that point DNR parks will close the island to vehicles. Pedestrians and bikes are still allowed on [...] the island when it is closed to vehicles."

There are currently 1800 legal parking spots. Once the car count reaches that point DNR parks will close the island to vehicles. Pedestrians and bikes are still allowed on when the island when it is closed to vehicles.

In a city of over 600,000 people and a metro region of 4 million, there are only 1,800 legal parking spots on Belle Isle. The main ways to reach the island are by driving over the MacArthur Bridge, riding a bicycle, or walking. Frequent bus service, water taxis, or a MoGo Detroit station on the island would be good alternatives but are only an option during the Grand Prix. The #12-Conant bus could be a good alternative for reaching the park, especially when there are capacity issues, with a few tweaks.

Small ask: Expand the #12 Conant bus route to reach more of the island.

Detroit’s oldest bus route is not Woodward or Jefferson. It is actually the Belle Isle bus route. Dating back to 1909, the Detroit Department of Parks and Boulevards ran Packard buses on Belle Isle for employees and visitors. In 1924 the city took over the route and it operated 7 days a week from 6:30 a.m. to midnight with 30-minute headways. As you can see from the map below, the bus used to cover more of the island.

Over the years the standalone route was combined with other city routes and even discontinued for a while. Currently, the Belle Isle bus route is part of the #12 Conant bus route. It only runs every 50 minutes on weekdays and every 60 minutes on Sunday between State Fair and Belle Isle. It only makes one stop on the island near the Belle Isle Aquarium and Scripps Conservatory. To reach the rest of the park, passengers must walk for miles on the road or on grass. As a parent, I wouldn’t feel safe walking several miles on the road to reach the nature center, the beach, or Scott Fountain with my family, yet many do. Expanding the route would be easy and would really only require adding additional signs and benches around the island.

Medium ask: Expand Route #12 and increase frequency of the #12 bus to every 30 minutes.

Because bus #12 Conant only runs every 50–60 minutes, it is not an attractive option for reaching the island. From 1921-1980 the park had its own bus station. These days the bus stop at the park’s entrance is little more than a sign on a pole with no bench on a narrow median. I sure wouldn’t want to wait an hour for a bus there with my family. Increased frequency could make this a more attractive option. Combined with an expanded route, people could access more of Belle Isle more frequently. Also, please put a bench by the sign at least.

Belle Isle Bus Stop. How it started. How its going. pic.twitter.com/fKK1DbfU43

Big ask: Add a bus route on the island that would run all year and make a bus-only lane on the MacArthur Bridge.

I'm asking the city to create a new bus route on Belle Isle. It could stay on the island like it used to or run between Belle Isle and downtown where there's ample parking. This would be convenient for residents who transfer at Rosa Parks Transit Center and for tourists who are staying downtown because not everyone who visits Detroit drives. To make it successful, better wayfinding would be required at bus stops and a bus lane on and off the island would keep it on schedule. There are five lanes on the MacArthur Bridge, two in, three out, and the center lane could easily be turned into a bus-only lane to ensure that buses are never stuck in traffic. The bus-only lane would likely be up to MDOT.

Mayor Mike Duggan, whatever you decide to do with the money, one thing is clear. There is currently no frequent, equitable way to reach Belle Isle unless you have your own car and even then, you may not be allowed to reach the park if it's full of cars. Belle Isle needs better bus service.

This article was originally published on David Gifford's blog. It is republished here with permission.