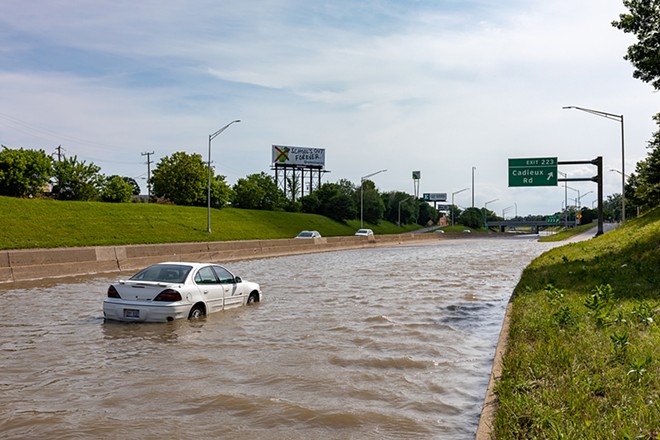 An apocalyptic TikTok video uploaded over the weekend showing an Amazon van driving past abandoned cars on a flooded Detroit highway, set to the soundtrack of Bo Burnham’s over-the-top tongue-in-cheek synthpop anthem “Bezos I,” seemed to perfectly encapsulate the vibe of 2021 so far. Amazon CEO Jeff Bezos’s wealth has skyrocketed by more than $86 billion during the pandemic, making him the wealthiest person in history, and he’s now plotting his own private expedition into space. However, the country he will leave behind is literally crumbling apart.

Historic rainfall on Friday caused power outages in metro Detroit, at least 1,000 cars abandoned as highways filled up with water, and countless flooded residential basements in the area. The flooding produced more viral videos, including one showing a man jet-skiing down the street in Dearborn, as well as a surreal image of people playing in a flooded part of a highway as if it were a beach on one of the Great Lakes, prompting an even more surreal tweet from Michigan State Police. (“Finally in the things I would never thought I would have to say: Do not go into the water,” an MSP officer tweeted. “This water has debris, sharp metal, submerged cars, gasoline and oil floating in it. There is also a good chance that there is sewage also in the water. In other words it’s gross!”)

“Our city has experienced extraordinary rainfall of nearly 6 inches in 24 hours, far beyond the capacity of Southeast Michigan’s stormwater system and the forecast calls for the rains to continue,” Mayor Mike Duggan tweeted on June 26, adding, “City water, roads, and police and fire staff are working around the clock to help those in need, and to ease flooding conditions as quickly as possible.”

We’ve been here before, however. People with memory better than a goldfish’s will recall the great flood of 2014, which also saw massive flooding in the area thanks to 4.57 inches of rain. At the time, the Michigan Department of Transportation suggested that the flooding could have been caused by copper thieves, who stole metal pipes from pump stations to sell for scrap metal. But MDOT later walked back the comment, saying the scrappers were just a possibility. In the end, they blamed poor maintenance of the region’s sewage infrastructure as the culprit.

“In 2014 MDOT blamed ‘copper thieves’ for historic flooding,” Detroit Will Breathe, the local Black Lives Matter organization that has organized anti-police-brutality marches in Detroit since 2020, wrote on Twitter. “They gave no evidence for this, and they said later that poor infrastructure maintenance was the real cause, but only after the copper story dominated the news cycle as a way to blame and criminalize Black Detroiters,” adding in another tweet, “In Detroit, man-made crises look like your home and your whole street getting flooded when you don’t even have access to affordable running water.”

Detroit Will Breathe cofounder Tristan Taylor expounded on that subject in a Facebook post, saying that the government’s failure to address the problem after 2014 was “an example of the moral and political failings of capitalism in general, and City officials like Mike Duggan in particular.”

“Residents, particularly those in District 4, have warned of issues of flooding for years,” he wrote. “Instead of developing a serious plan to deal with this problem, City officials have instead prioritized bike lanes and streetscape designs that have more to do with the recreational activity of the ‘new,’ white, and middle-class Detroiters they hope to attract than necessary infrastructure changes which could have generated thousands of jobs for Detroiters.”

The flooding comes at a pivotal moment. Detroit is poised to receive $826 million from the federal American Rescue Plan, and groups like Detroit Will Breathe are calling for Duggan to allocate the money to repairing Detroit’s infrastructure. The group planned a protest outside the Mayor’s Manoogian Mansion on Monday afternoon to demand input from city residents on how the funds are spent.

“It is inexcusable for the Mayor to have meetings to discuss general buckets of priorities, but not seek community engagement for the budget proposal itself,” the group wrote in a press release. “Detroiters, especially in the aftermath of the significant flooding that took place days ago, want to make sure that we are investing in ALL of Detroit, and not just select parts of the City.”

Nick Schroeck, an associate dean at University of Detroit Mercy School of Law, said in a Twitter thread that the floods were due to a failure at the national level. “The thing that's really depressing about the flooding in Detroit and Southeast Michigan is that it is predictable and predicted with climate change,” he wrote. “We've lived through it in 2014. We know that more intense rainstorms will continue and grow ever stronger.”

During a news conference on Saturday, Detroit officials said the rainfall was more than they had expected, with Detroit's Water Department Director Gary Brown also saying the flooding was an example of the effects of climate change. (Before 2014, the previous rainfall record in the state was 4.74 inches in a single day in 1925.)

Worse, it’s not over in the immediate future, with more rain forecast through the rest of the week. In the meantime, the city has created an emergency hotline, 313-267-8000, for people to report property damage and receive disaster-relief funds. Online claims can be made here. The State of Michigan has some non-emergency aid info here.