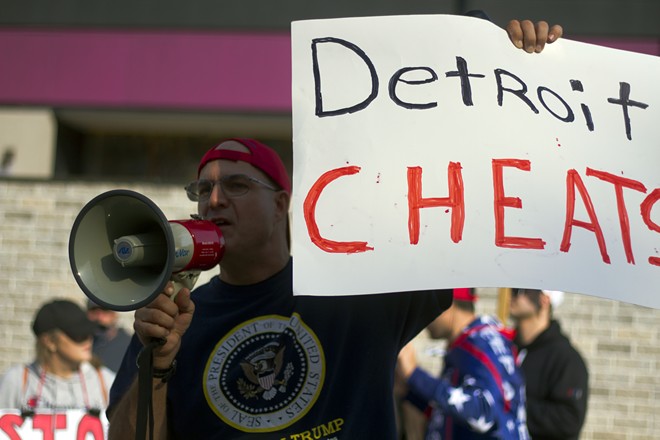 Former U.S. Attorney General William Barr reviewed President Donald Trump’s claims of election fraud at the TCF Center in Detroit last year and concluded they were baseless, he told The Atlantic in an interview.

Barr broke the news to Trump at a meeting in the White House, where the president was watching a Michigan legislative hearing on the election.

Barr pointed out that Trump did better in Detroit than in 2016. Trump lost, not because of fraud, but because he did poorly in the suburbs.

Trump and his supporters, including state Rep. Matt Maddock, R-Milford, had claimed tens of thousands of bogus ballots were snuck into the TCF Center in the middle of the night. As evidence, they referred to videos showing ballots arriving at the TCF Center after the 8 p.m. deadline.

“They saw the boxes going in!” Trump insisted.

But as Barr discovered, those ballots were legitimate and came from some of Wayne County’s 662 precincts.

As Trump watched the Michigan election fraud hearing on television, Barr told him that his legal team was a “clown show” that keeps “shoveling this out.”

“You know, you only have five weeks, Mr. President, after an election to make legal challenges,” Barr told Trump. “This would have taken a crackerjack team with a really coherent and disciplined strategy. Instead, you have a clown show. No self-respecting lawyer is going anywhere near it. It’s just a joke. That’s why you are where you are.”

“You may be right,” Trump conceded.

After reviewing other claims of election fraud, Barr concluded, “It was all bullshit.”

Although Trump and his allies have failed to show any evidence of widespread fraud, Republican lawmakers in Michigan and other states have introduced legislation that would restrict voting access. Voting rights advocates have denounced the bills as a coordinated, nationwide voter-suppression campaign that will disproportionally harm voters of color.