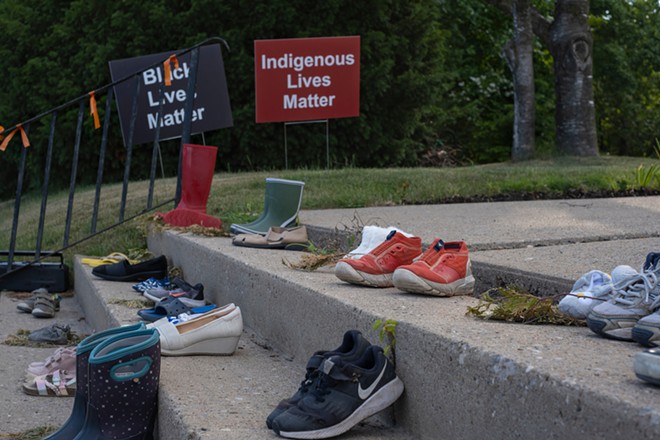 The recent discovery of hundreds of unmarked graves for First Nation children at the sites of boarding schools in the Canadian provinces of British Colombia and Saskatchewan have prompted questions about former Michigan indigenous residential schools and whether they might also be harboring similar undocumented gravesites.

“Here in Michigan, we are all well too familiar with the federally run boarding schools,” the Match-E-Be-Nash-She-Wish Band of Pottawatomi (Gun Lake Tribe) said in a statement to Metro Times. “Each family has our own stories of the taking of our children and being sent to these schools... A meaningful investigation has to happen at all of the Michigan area boarding schools.”

In its statement, the Match-E-Be-Nash-She-Wish Band of Pottawatomi praised U.S. Department of the Interior Secretary Deb Haaland’s recent announcement of a Federal Indian Boarding School Initiative.

The Federal Indian Boarding School Initiative will investigate residential facilities, enrollment records, correspondences, maps, photographs, and administrative reports, which “may later be used to assist in locating unidentified human remains,” according to a memorandum put out by the Department of the Interior.

“I am a product of these horrific assimilation policies,” Haaland, a member of New Mexico’s Laguna Pueblo and the first Native American to serve as a Cabinet secretary, wrote in an op-ed for the Washington Post. “My maternal grandparents were stolen from their families when they were only 8 years old and were forced to live away from their parents, culture, and communities until they were 13. Many children like them never made it back home.”

Michigan was home to three Indigenous boarding schools: in Baraga, Harbor Springs, and Mount Pleasant. The boarding schools began with the Indian Civilization Act of 1819, as part of policies to force Indigenous Americans to assimilate to white, Christian culture. By 1926, more than 80% of Indigenous school-age children were attending boarding schools run by either the federal government or religious organizations, according to statistics by the National Native Boarding School Healing Coalition.

Michigan boarding schools like Holy Childhood in Harbor Springs, built in 1829 and run by the Catholic Church, were notorious for their physical, emotional, and sexual abuse against indigenous students.

“I have less hair on this side of my head because the nun was right-handed, so she would reach out and grab me on the left side of my head and drag me around, and then use my face and head as the dust eraser,” Yvonne Keshick, member of the Little Traverse Bay Band who attended Holy Childhood for eight years, told Michigan Radio in 2015.

The final report from the Federal Indian Boarding School Initiative is expected to be released in April 2022. Until then, Michigan tribes can only wait and speculate about what the federal investigation might uncover.

"Boarding and residential schools were a part of the genocidal policy to get rid of Native American, First Nations, Métis and Inuit people across the United States and Canada,” Cecelia LaPointe, executive director for the Native Justice Coalition, said in a statement. “Call these what they were — ethnic cleansing camps and torture chambers. The truth is being revealed but unfortunately the burden weights on our shoulders to heal, strengthen our people and advocate for accountability."