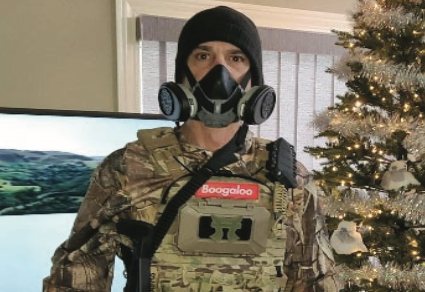 An Army veteran from Macomb County who posted images of himself on social media wearing a Boogaloo patch, camouflage, body armor, and gas mask with a knife and AR-15 rifle was arrested Wednesday on charges of storming the U.S. Capitol during the deadly Jan. 6 riot.

Thurlow is the 10th Michigan resident to be arrested in connection with the insurrection.

The FBI received three tips about Thurlow’s involvement in the riot after he posted photos and videos from inside the Capitol Building on Facebook. One of the tipsters was a family member.

“Ahh nothing like a new pair of 511’s and a fresh set of level IV SAPI’s in the plate carrier to go ‘peacefully protest’ with,” Thurlow allegedly posted on Facebook before the riot, wearing body armor and a gas mask with a rifle next to a Christmas tree.

Thurlow also was wearing a patch related to the 101st Airborne Division, in which he served from July 1988 to October 1991. Across his chest was a Boogaloo patch, which refers to a loose-knit confederation of anti-government militants who embrace the idea of a racially motivated civil war.

In a photo taken inside the Capitol building and posted on Facebook, Thurlow holds up a metal object and says, “the commies just fired this riot disbursement device at us. Guess what, we didnt disperse.”

The FBI has arrested more than 500 people so far for participating in the insurrection, which led to the deaths of five people either during or immediately after the riot. About 140 officers also were injured.

Karl Dresch, 40, of Calumet, was the first Michigan resident to be charged in connection with the insurrection. He collected and sold right-wing paraphernalia out of his Calumet home and threatened “war everywhere if we let this election get stolen.”

Two Macomb County men – Daniel Herendeen, 43, of Chesterfield Township, and Robert Schornak, 39, of Roseville – were charged on March 18 with storming the Capitol.

Jeramiah Caplinger, 25, of Taylor, was arrested on April 6 and charged with participating in the riot.

Anthony Michael Puma, 48, who declared on Facebook that “war was coming” and “we might have to start killing some commie bastards” was charged May 27 with storming the Capitol.