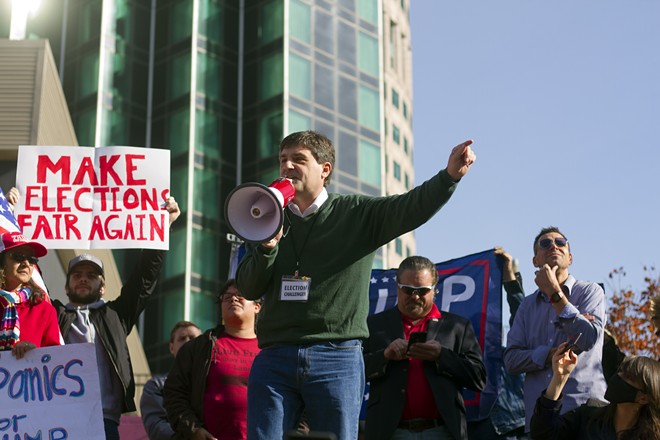 As Republicans on the state and national level begin to move past false claims of election fraud, many local GOP leaders in Michigan continue to peddle baseless conspiracy theories.

Progress Michigan, a progressive advocacy group, reviewed Facebook pages and groups controlled by county Republican parties and found that 64% of them have pushed election lies between Nov. 3 and June 30. Of the active Facebook pages, an astounding 98% have alluded to false claims of electoral wrongdoing.

“This push for The Big Lie goes beyond sharing misinformation and spreading conspiracy theories online, migrating to offline calls to action in the form of calls to legislators, 'Stop the Steal' rallies, and even organized efforts to attend the events in the nation’s Capitol on January 6th, which resulted in a violent insurrection to pressure Congress to overturn the results of the election,” states the report, entitled “The Big Lie: How Michigan Republican County Parties are still hanging onto the myth of election fraud.”

Some expected the incendiary rhetoric to cool down after the Republican-controlled Senate Oversight Committee released a report last month that concluded there was no evidence of widespread election fraud. But that didn’t happen.

“There has been very little reaction to the report,” Erin Lodes, digital and data researcher for Progress Michigan, said at a news conference Wednesday. “The only real interaction with it has been to push back on it. It has been a negative reaction.”

County Republican officials play an outsized role in shaping the party’s future because they recruit and promote candidates to run for office and help get out the vote. In Michigan, those officials are still embracing former President Donald Trump as the face of the party’s future.

Polls continue to show that Trump is still popular within the party. More than half of Republicans said Trump is the “true president,” according to a recent Reuters/Ipsos poll.

False claims about election fraud prompted Michigan lawmakers in March to introduce a 39-bill package that would curtail voting access, impose restrictions on absentee ballots, limit the secretary of state’s ability to assist voters, and make it easier for political appointees to overturn elections.

Sam Inglot, deputy director of Progress Michigan, called on Republicans to “get on board with reality and undo the damage they have caused.”

“The worst thing we can do is nothing,” Inglot said.