For nearly five decades, Gray, 69, had maintained his innocence in the 1973 shooting death of 23-year-old Army veteran Reuben Bryant in a Euclid Street apartment on the city’s west side.

Despite the fact there was no physical evidence placing him at the scene of the crime — and based solely on questionable eyewitness testimony — Gray, then 21, was convicted of first-degree murder and sentenced to life in prison by Judge Justin Ravitz, the 32-year-old “radical” lawyer who had just been elected to the bench.

After Gray’s story was featured in Metro Times last April, he and his attorneys struck a deal with the Wayne County Prosecutor’s office. Shortly after 2 p.m. on May 25, after 48 years behind bars, Gray walked out of prison to a joyous group of family and friends.

“It’s one of the happiest days of my life,” Gray told Metro Times. “I feel blessed and grateful for the people who made this happen — people of all races … this time the system worked.”

Gray’s case is reminiscent of Rubin “Hurricane” Carter, the wrongfully convicted boxer immortalized in song by Bob Dylan and on film by Denzel Washington. 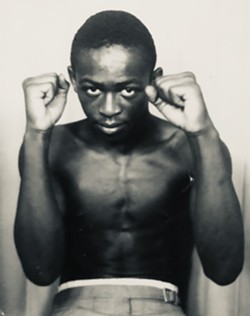 Now more than half a century later, Gray is being honored by the Detroit Golden Gloves boxing association.

“Boxing was a metaphor for some of the things I went through in prison,” Gray says. “Life is gonna knock you down here and there — it’s a matter of getting up and grabbing the ropes.”

“Back in Ray Gray’s day, I don’t think they gave out belts to the winners,” says Detroit Golden Gloves president Ansel Stewart. “So we’re going to present Mr. Gray with a special championship belt during intermission on Sunday.”

Gray will be honored on the third and final day of the Detroit Golden Gloves Boxing tournament, Sunday July 25, at 2 p.m. at Bert’s Warehouse. Gray will also present a championship belt to the winner of the 125-lb. weight division.

This weekend’s winners will then have the opportunity to fight in the national Golden Gloves boxing tournament in Tulsa, Oklahoma, Aug. 9–14.

Bert’s Warehouse is located at 2727 Russell Street, Detroit. For tickets and more details, go to detroitgoldengloves.org.