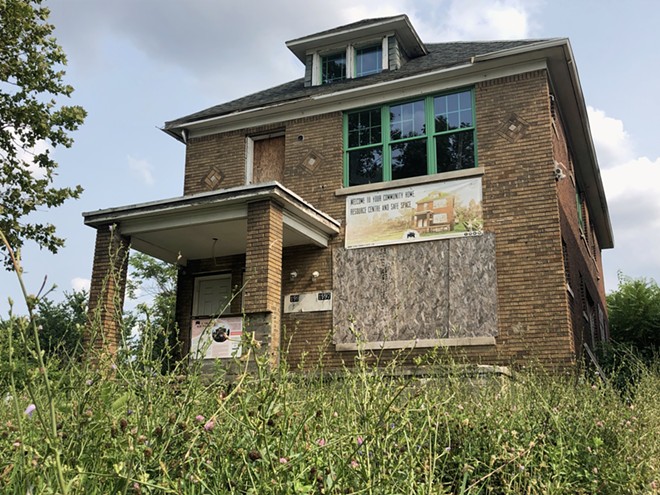 In the spring of 2017, three eager architecture students from the Netherlands swooped into Detroit and made a bold promise: They would fight climate change by transforming an abandoned, ramshackle house on the city’s west side into a self-sufficient home with a windmill, solar panels, green roof, community center, and urban garden.

The large brick house, they pledged, would serve as a model for affordable, sustainable innovations that could be replicated across the globe to reduce energy consumption.

Dubbed the Motown Movement, the venture began with an earnest, but lofty vision for the house at 1995 Ford St. in the Dexter-Linwood neighborhood. They would convert the main floor into a community center with space for lectures and start-up businesses. The basement would become a research center with computers, wifi, and a workspace for Detroiters to learn how to reduce their energy bills. And the spacious upper two floors would go to a family who lost their home to foreclosure.

The house would then serve as a showcase to teach others how to build similar energy-neutral homes on a low budget using do-it-yourself methods. A host of information on sustainable construction would be available on their website and shared at the home’s community center.

The students purchased the house from the Detroit Land Bank for $1,000.

To pull off this ambitious endeavor, the students collected more than $100,000 in donations, including a $50,000 grant from the Michigan Economic Development Corporation, and forged relationships with community organizations such as Focus:Hope, EcoWorks, the Greening of Detroit, and Midtown Inc.

“Together, we will make sure the living conditions for all Detroiters will improve and by donating we will make sustainable housing accessible for everyone!” the group pledged on its crowdfunding page.

Four years later, the house is a shuttered, vacant eyesore across the street from a park and elementary school, and the community gardens are overrun with waist-high grass and weeds.

Wayne County recently foreclosed on the house because the Motown Movement failed to pay property taxes for the past three years, racking up a delinquent $4,203 bill.

The website that was supposed to provide a plethora of information on building an affordable, energy-efficient home is now defunct, and the group’s social media pages have not been updated in more than a year.

The fate of the project is an all-too-familiar scenario in Detroit, where cheap properties and a media-fueled comeback narrative draw out-of-town investors who have grand plans but often lack the financial means or will to follow through. They frequently rely on incentives such as tax-financed grants and assistance from local nonprofits, taking limited resources that could be used for Detroiters with more of a vested interest in the city.


And all too often, when the projects hit a snag, outside developers abandon the projects and fail to pay the property taxes, which are used to fund city services such as roads, public transit, and police protection.

About a decade ago, Gary Wozniak, who previously spent time in federal prison for fraud, embarked on a plan to transform 40 blighted acres on Detroit’s east side into a multimillion-dollar commercial farm, Recovery Park, that would hire at least 100 formerly incarcerated workers seeking barriers to finding employment. It never happened.

Or take the Packard Plant, the sprawling, long-abandoned auto factory on Detroit’s east side that was purchased in 2013 for $405,000 by Fernando Palazuelo, a Peru-based developer who promised to spend $350 million to convert the ruins into residential, commercial, recreational, and art space.

Eight years later, without any significant progress, the plant continues to crumble, and Palazuelo is often delinquent on property taxes. In October, Palazuelo said he now plans to demolish large swaths of the factory and find occupants for salvageable sections of the plant.

Robert Elmes, founder and executive director of Galapagos Art Space, a performance and cultural center based in Brooklyn, New York, gained national attention in 2014 when he pledged to move his organization into a Corktown building. “Simply put, New York City has become too expensive to continue incubating young artists,” the project said on its website.

But in 2018, he sold the building to Bedrock Detroit, moving away from the project, saying he decided to focus instead on caring for his young son, who had been diagnosed with leukemia.

Bill Hults, a Chicago-area investor, bought 17 commercial buildings and houses in the Wayne County auction in 2013 and left them open to trespass and strewn with garbage. He didn’t pay the property taxes and was caught illegally scavenging some of the buildings for scraps, prompting Detroit police to get involved.

One of the buildings was the former Cadillac Stamping Plant near Gratiot and Conner, a 945,000-square-foot factory that he said he planned to lease to companies to produce material for precast concrete homes and condos. In 2014, environmental regulators received complaints that he was forcing his employees to work inside the asbestos-laden plant.

The city of Detroit began demolishing the building this summer.

Chris McTaggart, a local expert in building energy efficiency and owner of Dream DET, an organization focused on sustainability, wanted to see Motown Movement succeed. He met with the students and says they seemed sincere in their visions. But, he says, the project was “based more on an idea” than a workable plan.


“The renderings showed impressive, but unrealistic attributes like a green roof on the house (green roofs don’t do well with pitched roofs) and wind turbines (wind generation looks cool, but is much more appropriate at grid-scale than residential applications),” McTaggart tells Metro Times in an email. “When discussing their end goal of ‘net-zero’ energy production, it was clear they didn’t really understand how to get there. The level of building energy efficiency that would need to be accomplished is significant and challenging for an early 20th century, 2x4 framed home with brick veneer walls and 2x6 ceiling rafters. I gave some recommendations and offered assistance, but ultimately they declined.”

Bob Hendrikx, one of the three founders of Motown Movement, defended the project and says it hit a series of unexpected setbacks. One of the contractors walked off the job, he says, and the basement was seriously damaged by a fire in 2017.

“It went up in flames real fast,” Hendrikx tells Metro Times. “The community has been super supportive and helped [with] cleaning and rebuilding. Yet the second group [of students] that came after us spent a full year [repairing] the damage. We lost almost $30,000.”

The cause of the fire remains unknown.

Then came the COVID-19 pandemic in March 2020, which made it impossible for the students to travel to Detroit.

By then, the students had installed a roof, windows, and most of the electricity, plumbing, and insulation.

To their credit, the students are trying to salvage the house by transferring ownership to CWO Farms, a Detroit-based organization that promotes healthy eating. The plan is to first pay back the delinquent taxes in hopes of getting the home off the foreclosure list, says Simon Biervliet, external affairs manager for Motown Movement.

“Saddened by the news that we probably could not come back for a big while, we picked up our courage and decided that the project needed to be finished no matter what,” Biervliet tells Metro Times. “We searched for the right partner/organization to take on this task and found them.”

But transferring ownership won’t be easy. If they’re able to convince Wayne County to remove the house from the foreclosure auction, they still have to get permission from the Detroit Land Bank to take possession of the home. As part of the deal to buy the house, the Detroit Land Bank has the authority to take possession of the deed if the project is not completed.

Alyssa Strickland, spokeswoman for the Land Bank, says the agency isn’t familiar with plans to transfer ownership of the house to CWO Farms. She says the Land Bank didn’t seize control of the house earlier because of the setbacks and the pandemic.

“Extensions were granted based on these setbacks that were beyond the property owner’s control,” Strickland tells Metro Times in an email. “Then during the height of the pandemic, all compliance cases were granted extensions because of public health concerns [and] restrictions. However due to continued lack of progress, the case was referred to potential reconveyance this spring. The case is currently under review by our legal and Compliance teams.”

But if Wayne County moves forward with the foreclosure, Motown Movement and the Land Bank would lose rights to the house, Strickland says.

Mark Fentress, chief farmhand at CWO Farms, is hoping to take possession of the house, which would require paying the property taxes to get it out of foreclosure and working with the Land Bank to transfer the deed. The plan is to create a horticulture and gardening center for the community, with the first floor serving as a meeting space with classrooms on gardening. The second floor would provide storage for gardening supplies. And the third floor would be a studio apartment, preferably for someone at CWO Farms.

“I talked to Motown Movement, and we seem to have a decent working relationship,” Fentress tells Metro Times. “We’re looking to possibly pay the taxes and proceed with the sale.”

Although Motown Movement’s endeavor failed, Biervliet says, “we feel like we did make a small difference in the neighborhood.”

“We provided the neighbors with a place to come together and have events,” he adds.

In May 2019, Daily Detroit interviewed two Motown Movement volunteers for a podcast. At the end of the interview, the hosts said they were impressed, but noted the history of outsiders failing to finish projects.

“I was kind of skeptical of this whole thing at first — more people coming from outside to tell me exactly what to do about my city,” one of the hosts said.

The other added, “Detroit is starting to rack up a growing list of outsiders who come into town sprinkling the fairy dust saying ‘I’m going to fix Detroit,’ and it sort of goes bust.’”