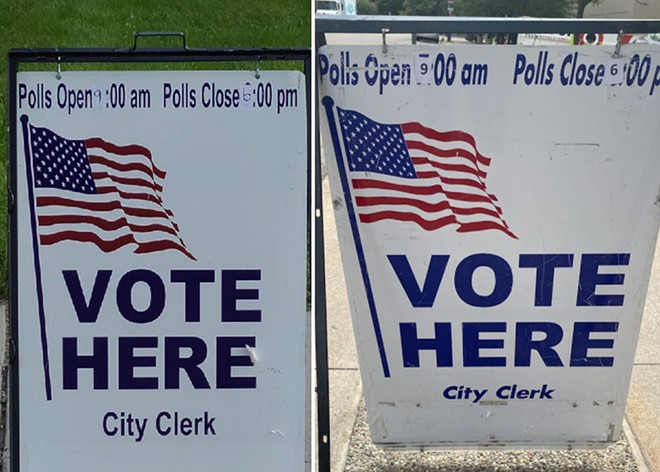 On Tuesday, Detroit held a primary election ahead of its November general election, where residents will vote from a narrower field of candidates for mayor, city council, and city clerk — the office that runs Detroit's elections.

But incumbent city clerk Janice Winfrey has some explaining to do after photos surfaced showing signs at Detroit polling locations with the wrong hours of operation on them.

"Here are 2 signs placed by the current Detroit City Clerk with the wrong polling times," Tlaib tweeted, adding, "The lack of accountability for this type of incompetence continues to enable it all."

The signs had stickers printed with the wrong numbers covered over the correct numbers. Tlaib said they were found outside Henry Ford High School and Detroit School of Arts.

Here are 2 signs placed by the current Detroit City Clerk with the wrong polling times.

These signs are at Henry Ford School & Detroit School of Arts.

The lack of accountability for this type of incompetence continues to enable it all. @ACLUofMichigan pic.twitter.com/qNwApsbohP

After Tuesday's primary, Winfrey's challenger is Denzel McCampbell (who took a leave of absence from his gig as Tlaib's communications manager to run for city clerk). In a statement to Metro Times, McCambell calls for an investigation into the signs.

"I was deeply troubled to see polling signs with the incorrect hours on them," McCampbell tells Metro Times. "We know that misinformation like this is a tactic to suppress the vote. I hope the city clerk’s office will do a full investigation into how this happened and work to ensure it does not happen again."

He adds, "I greatly appreciate Detroiters voting to advance our campaign into the general election. We need a new city clerk in Detroit."

McCampbell says the incorrect signs were only one of several problems he heard about on Tuesday.

"Yesterday, I heard from a number of voters who were not notified of their polling location changing — resulting in at least one voter not being able to vote before polls closed," McCampbell says. "Throughout the campaign, countless voters did not know there was an election coming up and many did not receive an absentee ballot after requesting one."

He adds, "These are all the duties of the city clerk and I look forward to speaking with Detroiters about why we need change and how I plan to improve the office. We are going to transform the way we run elections in the city of Detroit and increase civic engagement while doing so."

According to Detroit's election results, Winfrey earned 48,117 votes, while McCampbell earned 10,434. The two will face off again in the Tuesday, Nov. 2 general election.

Winfrey did not respond to numerous requests for comment.

In an earlier email to Metro Times, Winfrey denounced recent efforts by Michigan Republicans to enact voter reform legislation. Critics have blasted such legislation as being driven by unsubstantiated claims that the election was rigged against former President Donald Trump and rife with fraud.

The 39-bill package in Michigan would make it harder to vote, including requiring voters to present a photo ID with their absentee ballot application, prohibit clerks from providing prepaid postage on absentee ballot return envelopes, and restrict ballot dropbox access, among other things.

"It's not only an attempt to suppress the vote in Detroit, but it's also an attempt to minimize voter turnout in all urban communities in Michigan," Winfrey told Metro Times. "These bills have little impact on the administrative process and it places tremendous burdens on the electorate."