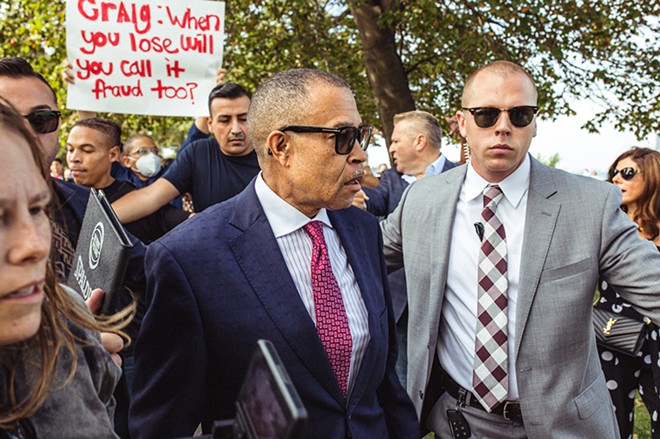 Former Detroit Police Chief James Craig officially kicked off his campaign to run as the Republican Party candidate for governor of Michigan on Tuesday, with a press conference that quickly went completely off the rails — and indicates that the 2022 race is shaping up to be anything but ordinary.

Craig made his official campaign announcement in a press conference on Detroit’s Belle Isle. Well, sort of. Craig couldn’t even get a word in, as he was quickly swarmed by Detroit Will Breathe activists against police brutality, who drowned out his speech with chants like, “Hey, hey! Ho, ho! James Craig has got to go!”

James Craig makes an inaudible message as he is drowned out by Detroit Will Breath protesters at Belle Isle prior to Craig announcing his run for Michigan Gov. @freep pic.twitter.com/12ufofzqR8

Craig, whose campaign slogan is “lead from the front,” then retreated, relocating the press conference to the Icon building, or what Detroit Will Breathe described as “the balcony of a gentrification building” in the caption of a tweeted photo.

The optics, as they say, were not good.

Craig had to move his press conference to the balcony of a gentrification building pic.twitter.com/xK3U1FCudv

Of course, there’s the question as to why Craig even felt the need to hold this press conference in the first place. It was ostensibly to make his campaign official, but Craig had already indicated that he was running for governor for months. He retired from his role as DPD’s chief in June, and in July, he appeared on Fox News to tell Tucker Carlson, “I’ve got to tell you, I’m running.” Plus, he’s already been selling merch on his website that says “Chief James Craig for Governor.”

The debacle led to the Craig campaign canceling a planned stop in Flint. But if his hope was to drum up media attention, then he certainly succeeded at that.

Craig used the opportunity to level wild, baseless conspiracy theories in the style of Donald Trump, including saying that the Department of Natural Resources, which runs the state park, purposefully chose not to protect him, and said that he believed that the protesters were paid to be there.

“The DNR knew about the potential for protests yesterday, I’m told. ... They indicated they were going to come and move the protesters back," Craig told The Detroit News. “That never happened. So it makes me wonder if it was by design.”

After his speech, a journalist with WDET reportedly pressed him on how he knew the protesters were paid and who paid them.

“I don’t know, but I gotta believe,” Craig replied. When the reporter pressed him further, he replied, “I feel good about it, I feel like they were paid. I don’t have any hard evidence but—”

“Is that how you operate as an officer then?” the reporter asked. “You don't have any hard evidence but…”

Speaking of Craig’s record as Detroit’s top cop, there’s another major problem with his allegations. Detroit Will Breathe rose to prominence in 2020, as Black Lives Matter protests swept the nation following the death of George Floyd by Minneapolis police. The protesters criticized DPD for its brutality, and as if to prove their point, DPD responded by unleashing brutal force on them, including shooting them with rubber bullets and tear gas. DPD’s overzealous response to the protests got so bad that journalists were routinely caught in the crossfire, leading to the City of Detroit to attempt to mitigate the violence by issuing special color-coded IDs to journalists. Five legal observers from the National Lawyers Guild, who were there to document civil rights violations, have since filed a lawsuit against Craig, as well as the City of Detroit and Mayor Mike Duggan, for violating their own civil rights.

Here’s the thing — last summer Craig had not yet revealed that he was a Republican who had twice voted for Trump. So it doesn’t make sense that some sort of shadowy entity working on behalf of the Democratic Party would launch a coordinated attack against him and, by extension, Detroit Mayor Duggan, an ally of Craig’s rival, Gov. Gretchen Whitmer.

As Detroit Will Breathe pointed out in a statement to Deadline Detroit, “The only person there seeking to get paid for their politics was Craig.”

Craig quickly booked a slot on “Tucker Carlson Tonight” Tuesday evening to whine about the campaign launch SNAFU and level more baseless allegations, including that he believed that no less than Whitmer was behind it, colluding with DNR and Michigan State Police to conspire against him.

“[As] you saw in the video, it became very tense,” he told Carlson. “So you know what, we need to hold Gov. Whitmer accountable for this. She oversees the Michigan State Police and the Department of (Natural) Resources that covers the island. I know this is not accidental. This is not accidental."

In a statement to The Detroit Free Press, Whitmer spokesman Bobby Leddy called the allegation “a baseless attack,” adding that the DNR proactively contacted the campaign to affirm that crowd control would be the campaign’s responsibility. Text messages shared with the Freep seemed to prove this.

For their part, though unruly, the protesters were not violent. However, that a veteran of a 44-year career in law enforcement seemingly had no clue how to run security at his own campaign event poses questions as to how he can possibly run the entire Great Lakes State.

If this is any sort of indication as to how Craig’s 2022 campaign will go, buckle up, folks. It’s going to be a bumpy ride.