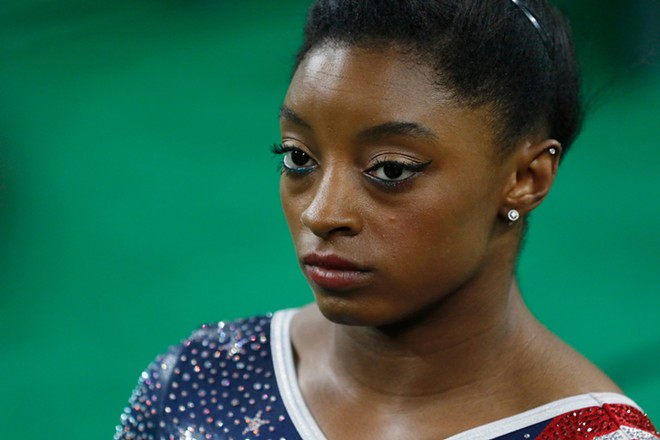 Simone Biles, the most decorated U.S. gymnast in history, broke down in tears during an emotional Senate Judiciary Committee hearing Wednesday regarding the FBI's bungled investigation and cover-up of hundreds of accounts of sexual abuse and molestation at the hands of Larry Nassar, the convicted criminal and former USA Gymnastics and Michigan State University doctor.

"I am also a survivor of sexual abuse," Biles said Wednesday. "And I believe without a doubt that the circumstances that led to my abuse and allowed it to continue, are directly the result of the fact that the organizations created by Congress to oversee and protect me as an athlete — USA Gymnastics (USAG) and the United States Olympic and Paralympic Committee (USOPC) — failed to do their jobs."

Biles, 24, was joined by three world-famous gymnasts, including McKayla Maroney, who detailed the abuse Nassar subjected her to as a teenager, including frequent molestation — which Maroney says was so severe that she thought she might die because she believed "there was no way" he would let her go.

Maroney, 25, like so many others, alerted the FBI about the abuse. She recalls agents responding to her traumatic retelling of events with: "Is that all?" At the time, she was a minor.

“Not only did the F.B.I. not report my abuse, but when they eventually documented my report 17 months later, they made entirely false claims about what I said,” Maroney said. “They chose to lie about what I said and protect a serial child molester rather than protect not only me but countless others.”

Wednesday's hearing comes just days after the FBI fired Michael Langeman, the supervisory special agent who interviewed Maroney in 2015 and was among those agents at the FBI's Indianapolis Field Office found to have "failed to respond to the Nassar allegations with the utmost seriousness and urgency that they deserved and required, made numerous and fundamental errors when they did respond to them, and violated multiple FBI policies."

More than 330 people have come forward with allegations of sexual assault and misconduct while under Nassar's care. But the FBI isn't the only system to have failed Nassar's alleged victims, as the earliest complaints made about the doctor's misconduct were submitted to MSU in 1997 — nearly 20 years before his eventual firing and arrest.

“To be clear. I blame Larry Nassar, but I also blame an entire system that enabled and perpetrated his abuse,” Biles said Wednesday.

The hearing before Congress follows a 119-page report conducted by the Justice Department's Inspector General which revealed the extent to which the FBI severely mishandled its investigation, released in July.

Per the report, during a 14-month period, nearly 40 girls and women claimed they had been molested by Nassar. During this same period, the FBI had already been made aware of previous sexual abuse allegations against Nassar, yet failed to investigate, follow up, or route a formal complaint, leaving the USA Gymnastics officials — and Nassar's alleged victims — in the dark for eight months before FBI officials in Los Angeles received yet another complaint.

The report also found FBI officials in Indianapolis failed to interview the alleged victims, nor did they properly handle evidence or document complaints. The agency ultimately failed to report abuse, according to the report.


FBI director Christopher Wray also testified Wednesday and apologized to Nassar's victims, adding that he was both "heartsick and furious" when he learned of the bungled investigation. Wray took the directorial position in 2017.

“We need to remember the pain that occurred when our folks failed to do their job,” he said and vowed that this level of neglect would never occur again.


Nassar is in his third year of a life sentence for federal child pornography crimes, as well as an additional 40- to 175-year sentence for assaulting nine girls and women while practicing sports medicine.