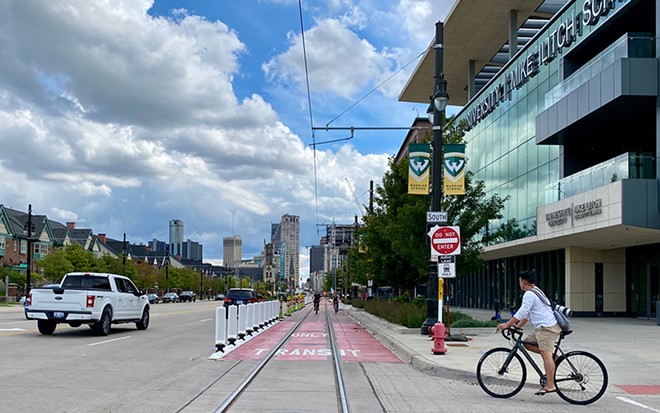 A stretch of Woodward Avenue in front of Detroit's Little Caesars Arena has been changed into a dedicated transit lane in order to keep things moving on game days and concerts.

Dan Lijana, a spokesman for M-1 Rail, the QLine streetcar's operating entity, says the dedicated lane is reserved for the QLine and DDOT and SMART buses and is expected to be completed on Monday. He says M-Rail has been working with the Michigan Department of Transportation, the City of Detroit, and Little Caesars Arena operators Olympia Entertainment since December.

Lijana says they hope to transform other stretches of Woodward into dedicated lanes.

"Dedicated lane has been a priority for our riders and for M-1 Rail since launch," Lijana says in an email. "We are pleased to have the critical area around LCA as the first section of implementation."

The dedicated lane stretches from Temple Street to the I-75 service drive.

"With events nearly every night of the year, this section of dedicated lane for QLine and other transit will make riding the streetcar faster, more convenient, and more enjoyable for our riders," he says.

The QLine has been prone to delays since it opened to the public in 2017 due to traffic, accidents, and illegally parked cars. (In 2019, then-candidate Joe Biden blocked the QLine to meet Mayor Mike Duggan at a Coney Island restaurant.) While a center dedicated lane for the QLine would have improved efficiency — and safety — developers like Dan Gilbert pushed for a streetcar that goes right up to the curb, as that was seen as more business-friendly, according to a report.

The QLine was closed for passengers during the pandemic but is expected to reopen to the public later this month.