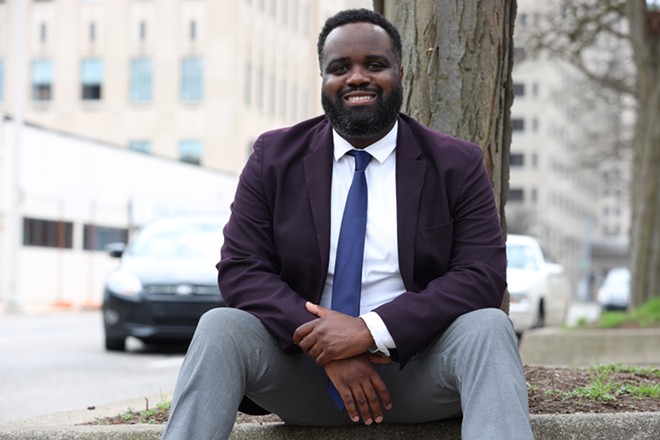 Denzel McCampbell, a voting rights advocate who is running to unseat Detroit Clerk Janice Winfrey, is calling for an investigation into city election officials’ decision to block a ballot proposal that calls for reparations for systemic racial discrimination.

Civil rights attorney Todd Perkins sued the Detroit Election Commission, which is chaired by Winfrey, for rejecting the proposal. Earlier this month, Wayne County Circuit Judge Timothy Kenny sided with Perkins, saying the commission didn’t have the authority to stop the proposal from appearing on the ballot because it met all of the requirements.

Perkins alleged the Detroit Department of Elections lied on a sworn affidavit that the petitions didn’t meet the requirements.

“Detroiters are tired of seeing their elected officials in the headlines and courtroom,” McCampbell said in a statement Thursday. “This time, it is clear that the Detroit City Clerk used her role on the Detroit Election Commission to attempt to stop an initiative that could clear a pathway to reparations for Black Detroiters. What is even more egregious is that an election official, who is under the direction of the City Clerk, submitted a sworn affidavit indicating the petitions were incomplete, even though they weren’t. This is a troubling oversight at best and a fraudulent act at worst. This is a tremendous violation of the public’s trust and Detroiters deserve better.”

McCambell is calling on the Detroit Office of Inspector General to conduct a “full investigation” to determine if election officials “purposely committed wrongdoing or misleading actions.”

“Detroit residents must be able to trust that when they submit petitions and signatures to the clerk’s office, it will be received and evaluated properly,” McCampbell said. “The lack of transparency and now accountability is evident of a breakdown in the public’s confidence in this office. It is time for a change to leadership that is responsive and responsible to the people.”

In July, the Detroit City Council unanimously approved placing a similar proposal on the ballot, which would give residents the opportunity to vote on whether the city should “establish a Reparations Committee to make recommendations for housing and economic development programs that address historical discrimination against the Black community.”

The resolution states that Black residents “have been systematically, continually and unjustly enslaved, unjustly segregated, unjustly incarcerated, denied housing through racist practices in the public land use arena as well as private realty markets.”

There are still questions about how the measures would be funded if voters approve it. The Michigan Constitution bars the use of tax dollars for racially exclusive purposes. And a constitutional amendment approved by voters in 2006 prevents preferential treatment based on race or ethnicity.

Some supporters have proposed using funds from recreational marijuana sales to fund reparations. But the city isn’t making any money from cannabis. A federal judge last month struck down a recreational marijuana ordinance, saying it’s “likely unconstitutional” because it gives preferential treatment to longtime Detroiters.

McCampbell, a Michigan State University graduate and lifelong Detroiter who grew up in the city’s northeast side in Krainz Woods, advanced to the general election in November after beating four other challengers in the primary in August. He took a leave of absence from his gig as communications manager for U.S. Rep. Rashida Tlaib, D-Detroit.

McCampbell has repeatedly called out Winfrey for mismanaging elections. During the presidential election in 2016, when Donald Trump won Michigan by just 0.2%, scores of voting machines malfunctioned, poll workers weren’t properly trained, and thousands of presidential ballots couldn’t be recounted because tabulations didn’t match the poll books.

For more than a month before the 2020 election, Winfrey’s election website was directing voters to the wrong absentee ballot application.

In the primary and general elections in 2020, voting totals for many precincts once again didn’t match precinct poll book numbers, which means they can’t be recounted. The problems prompted Wayne County canvassers to call for state intervention in 2020.

McCampbell also pointed out in August that some signs at Detroit polling locations during the primary election had the wrong hours of operation on them.