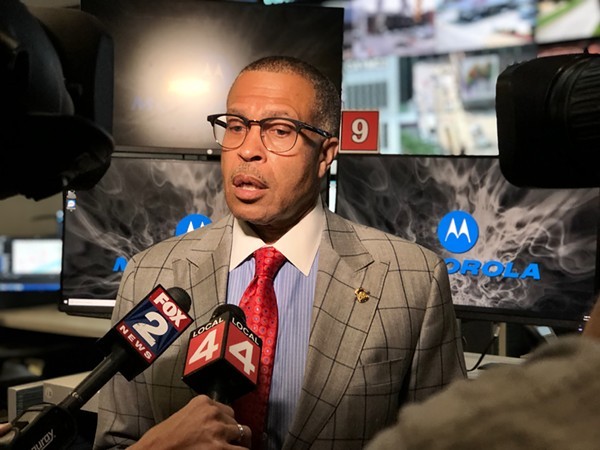 Republican gubernatorial candidate James Craig, who has previously dodged questions about former President Donald Trump’s allegations of voter fraud, told supporters last week that he believes there should be a full audit of the results of the 2020 election in Michigan because there are “valid concerns out there,” according to a secret audio recording obtained by Metro Times.

Craig made the remarks at a campaign kickoff event in Newberry when he was asked if he believed President Joe Biden “was legitimately elected” and whether he supports an Arizona-style audit.

“I’m always open for a thorough audit,” the former Detroit police chief said. “I’ve done it myself. When people raise issues, I can’t just make a decision and say there’s nothing there. You have to look into it to see what’s going on.”

The recording was obtained and provided by American Bridge 21st Century, a liberal political action committee that conducts opposition research on Republicans. The group also released a recording to Metro Times earlier this week that captured Craig saying that if he was elected he would block any attempt by Democrats to repeal Michigan’s 90-year-old ban on abortion.

Craig’s statements came a week before the Republican Party in Arizona announced Friday that its audit reaffirmed Biden’s victory in the state’s most populous county, dispelling conspiracy theories of widespread election fraud. Maricopa County Board Chairman Jack Sellers told The Arizona Republican that the draft report’s conclusions show “the tabulation equipment counted the ballots as they were designed to do, and the results reflect the will of the voters. … That should be the end of the story. Everything else is just noise.”

In fact, in the end, the audit actually uncovered slightly more votes for Biden and slightly fewer for Trump.

In June, Republicans lawmakers in the Michigan House of Representatives introduced a bill to require a thorough review of the state’s election results, even though the state had already conducted the most thorough post-election audits in state history and found no evidence of widespread fraud or irregularities.

Even the Republican-controlled Senate Oversight Committee concluded that Trump’s allegations of election fraud were baseless.

Earlier this month, Trump called Michigan Republican Party Chair Ron Weiser to urge him to conduct an audit in the state.

During Craig’s kickoff event, U.S. Rep. Jack Bergman, R-Watersmeet, interjected when Craig was explaining his position on the audit and said that election fraud was becoming a distraction that Democrats were exploiting.

“There’s nobody happy about the results, but where we win is by winning in 2022,” Bergman said. “As the chief already said, let things play out in the courts. If the Arizona forensic audit happens to yield some results that enable it to become a big deal, now you can have a discussion.”

Gov. Gretchen Whitmer supports a bill by Democrats to repeal the state’s 90-year-old ban on abortions, which was nullified following the Roe v. Wade decision.