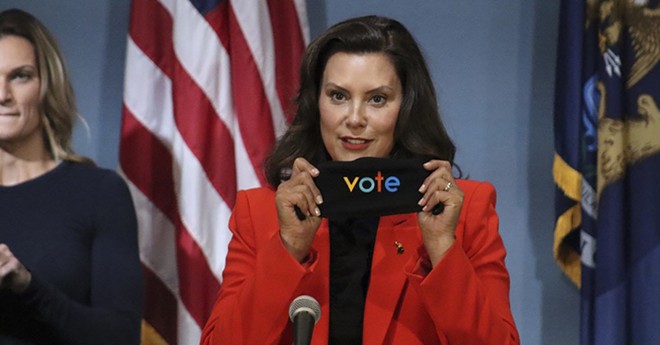 Gov. Gretchen Whitmer vetoed four election bills at a dinner with the Detroit NAACP on Sunday, saying the legislation was intended to restrict voting access and perpetuate baseless claims about election fraud.

The bills are the first of many that Republicans are pushing under the guise of “election integrity.” Emboldened by former President Donald Trump’s conspiracy theories about election fraud, Michigan Republicans earlier this year introduced a 39-bill package that would curtail voting access, impose restrictions absentee ballots, and limit the secretary of state’s ability to assist voters.

“I will always protect our civil rights and stand up for our democracy that countless Americans have fought to preserve,” Whitmer said in a statement Monday. “That’s why I vetoed legislation that would have perpetuated the ‘Big Lie’ or made it harder for Michiganders to vote. Right now, Michigan Republicans are participating in a coordinated, national attack on voting rights that is designed to undermine confidence in our election system and systematically disenfranchise Black voters, communities of color, older voters, and college students. I will have no part in any effort that grants an ounce of credence to this deception, so harmful to our democracy.”

Two of the bills were unnecessary and misleading because they addressed issues that were non-existent. HB 4838, for example, would prohibit electronic poll books and tabulators from being connected to the internet after the polls open. Some baseless conspiracy theories falsely suggested poll books may have been manipulated by outsiders, even though the poll books are not connected to the internet on the day of the election.

Whitmer said one of the bills would make it more difficult to place polling locations at senior living facilities and large apartment complexes.

“The governor demonstrated once again that she is the people’s governor,” Rev. Wendell Anthony, president of the NAACP Detroit Chapter, said in a statement. “She is the governor wherever she is from her desk in Lansing to a dinner at the NAACP. She is still Big Gretch and has the pen to prove it!”

“It’s clear Gretchen Whitmer isn’t interested in protecting democracy,” Gustavo Portela, spokesman for the Michigan GOP, said. “She’s more interested in grand standing and pandering rather than strengthening the security of our elections. This will change when we retire her next year and elect a new Republican Governor.”