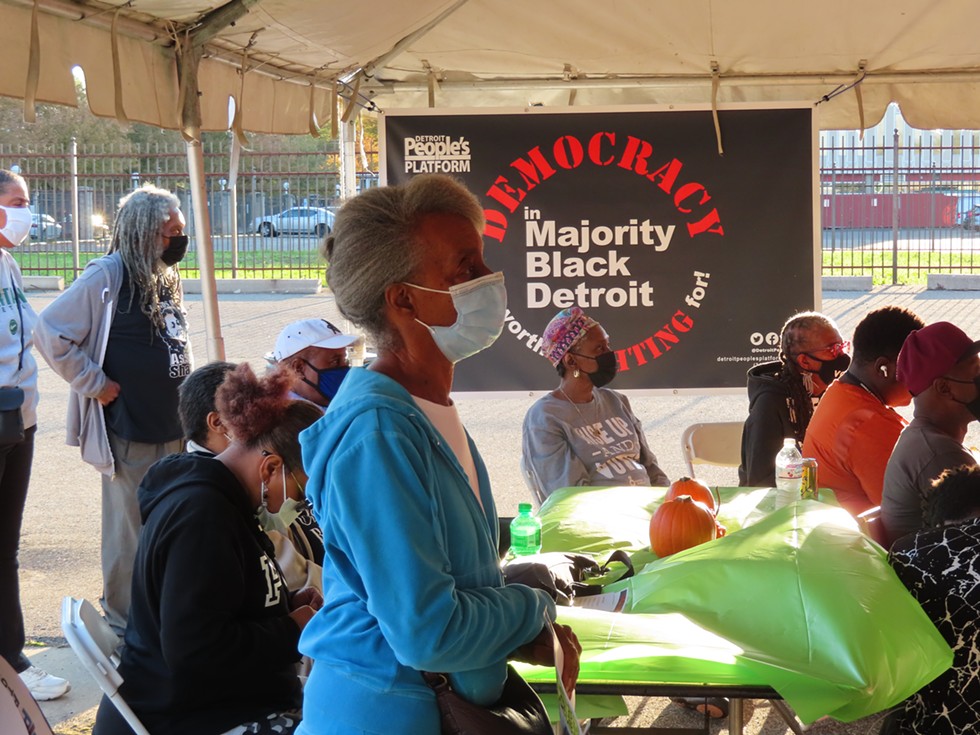 On a recent Friday, in the heart of Detroit’s New Center neighborhood, a crowd of roughly 50 people gather in a lot one block east of Pallister Park, just outside of the Fisher Building’s long shadow.

Made up of dedicated activists and community members, the group was responding to the Detroit People’s Platform’s call for a “Pro-Democracy Rally for Majority Black Detroit.”

The rally comes at a pivotal time in Detroit’s history, as the city’s leadership shovels massive tax breaks to corporate giants and private developers, leaving little for the general welfare of everyday Detroiters.

DPP’s argument is straightforward. In their own words: “Detroiters have a right to a city government that puts the needs and priorities of its residents first. We demand a return to a deeper form of democracy in Detroit, a democracy where the people hold political power and elected representatives sit in service to the common good.”

Things open with a chant that cut to the heart of why we’re here. An organizer leans into the megaphone and fires off: “Let Detroiters organize!”

“Democracy is our fight!” they reply.

Over the course of 30 minutes, six speakers take turns blasting what they see as the lousy condition of the city’s democracy. But with the attack comes a vision: that we can live differently together, with deeper commitments toward one another and the social fabric we share.

Linda Campbell, DPP’s Director, starts by erasing layers of confusion from what “democracy” means here. “We're sending a strong message this evening: you're not going to trample on our democratic rights,” Campbell says, adding, “We demand the right to participate in this city!” It’s rare to hear such a crisp, plain definition of an idea that gets buried under endless political gimmickry and weepy-eyed but ultimately empty tributes.

“Democracy means that people participate,” Barbara Wynder, an attorney and member of the Detroit Charter Commission, later echoes. “It doesn't mean a whole lot more than that.”

On first listen, this sounds like an idea everyone can get behind. But when you examine what genuine popular rule would look like, it becomes obvious that the city’s political and economic elite consider this type of democracy intolerable. Campbell sheds a harsh spotlight here. Over the last decade, we’ve seen how any step towards greater equality or participation for everyday people is inevitably met with vicious opposition from status quo defenders.

Take the fall of Proposal P back in August. For many progressives in Detroit, what happened is just the most recent example of how ferociously the ruling class can bite down when people demand more from their city.

To supporters, Proposal A’s rewrite of the city charter, its governing document, would have struck a significant blow against the city’s towering racial and economic inequality, addressing police brutality and environmental disaster, and guaranteeing a right to things like water, transportation, housing, recreation, and other basic human needs.

The response was swift and brutal. Organizers had spent two years talking with residents about their needs and hopes for the city and then bundled those into Prop P. But they were badly outspent, and ultimately crushed, by a web of Mayor Mike Duggan-aligned dark money groups with Orwellian names like “Committee to Protect Detroit’s Future” and “Detroiters Protecting Our Future.”

“They let the dogs out,” Campbell says.

The outcome was a hailstorm of false and nonsensical attack ads, billboards, and direct mail claiming Proposal P was “a problem” without explanation, making it nearly impossible to communicate the truth about Prop P to voters.

“This one socked me in the gut and knocked the wind out of me,” says Tawana Petty, a lifelong Detroiter and social justice organizer. “It was gonna deliver the things that our neighbors need, you know? Affordable water, affordable housing, transit, pushing back against mass surveillance and facial recognition.”

The irony, Campbell points out, is that Prop P actually reflected “the commitment of everyday Detroiters to co-govern with our existing administration.” In other words, this wasn’t a direct action campaign that brought the city to a halt with demands for sweeping change. Almost the opposite — organizers worked within the normal boundaries for improving Detroiters' lives. But in the end, that amounted to a serious threat to the status quo, and it was dealt with that way.

In 2016, Proposal A suffered a similar fate after trying to establish a community benefits ordinance in the city.

“Everyday folks said, ‘You know what? We ain't gonna let them take all our tax money and not give us a damn thing back,” Campbell says. “We want an ordinance. We can't depend on the handshake.’” That ordinance would have forced mega projects in the city, nearly all of which rely on massive public welfare, to come with real benefits for the communities they take root in. In response, the mayor and his allies on city council rushed to defend the ability of corporations to get rich off public money and offer zilch in return. Proposal B was their vehicle, and it ultimately won. Also billed as a CBO, Prop B is a janky Prop A knockoff, replacing enforceable benefits with much narrower negotiations.

And there is, of course, former Governor Rick Snyder’s horrific record as the nation’s most infamous nerd tyrant.

In 2012, voters defeated the state’s “dictatorial” emergency manager law only to see Snyder, who campaigned as “one tough nerd,” ram it back through the legislature, granting him the power to crush local democracy and impose geek squad tyranny in majority Black cities like Detroit and Flint. Here, it came with a highly questionable and ultimately painful bankruptcy for ordinary Detroiters. And in Flint, the consequences for working-class people were literally poisonous.

It’s worth remembering that Snyder ran on the terrifying pitch that he would make government run like a business. This is a perfect window into the irreconcilable conflict of elite rule as DPP understands it: Government’s purpose is to serve the public good. Businesses have a legal obligation to increase profits.

In a nutshell, political and economic leaders have been pounding democracy to dust in Detroit for years. As Campbell puts it: “They have devised ways, through fear, intimidation, and intentional disinformation, to destroy our ability to stand up and have a voice about how our city is governed. We ain't taking that.”

In a nutshell, political and economic leaders have been pounding democracy to dust in Detroit for years. tweet this

Behind each of these episodes is a common belief: that ordinary people must have their lives planned by their superiors, people who know better. Reverend Roslyn Bouier puts it this way: “When you make decisions for me, that's not my democracy. That's just for you.”

This isn’t abstract. An overwhelming body of evidence supports the idea that the characters in Detroit’s comeback story are significantly whiter and wealthier than the city itself.

According to a recent report by Detroit Future City, the median income for white Detroiters has climbed 60%, towering above an 8% increase for Black Detroiters, whose unemployment rate is 1.5 times the white rate. “In spite of a decade of growth,” the authors conclude, “substantial economic inequities persist in Detroit.” This is disturbing stuff for a city that’s 77% Black and where 30% of people live in poverty. And it’s an especially dangerous crossroads for the poorest and Blackest major city in the country — two groups who, historically, have had abysmally little influence over the forces that govern their lives.

As law professor Bernadette Atuahene details in a recent study called “Predatory Cities,” one in four Detroit properties were foreclosed on between 2011 and 2015 after failing to pay “systematically and illegally inflated” property tax bills. This equals more than 100,000 homes and incalculable human suffering, all of it completely needless. In March 2020, COVID-19 smashed its way across this same terrain, tearing through largely poor Black neighborhoods and killing thousands.

There’s a strong argument that these are the fruits of elite sway over every level of government. As a 2014 Cambridge University Press study concluded, the United States is basically a ​“civil oligarchy,” where ​“economic elites” and ​“business interests” exert massive influence over policy ​“while average citizens … have little or no independent influence.” It’s easy to see how this also applies to local politics. Detroit is dominated by a web of corporate giants, Chambers of Commerce, development groups, and super-rich Scrooge McDuck-type tycoons. And while some throw superficially impressive piles of money into philanthropy, they inevitably go on to fight ruthlessly against any steps to move power and wealth towards everyday people and away from the city’s fabulously rich.

“The city government has essentially failed to internalize Dr. King’s call to prioritize people over profit,” Petty says. “They still believe that if we just put enough profit” in the fast-growing, increasingly wealthy and white pockets, “it's going to trickle” out to the entire city. “And DPP is saying no, we have a quality of life issue here in the city” that can only be solved by meeting people’s basic needs.

The takeaway from the rally is clear: the superrich don’t give up their vast loot or sway over the world voluntarily. “I'm fighting to make sure that those resources are shifted,” Reverend Bouier says. And that requires a robust popular movement that ensures “everyday people are afforded the dignity of agency.”

Another is that in order to deepen democracy in the halls of power, we have to practice it in the smaller worlds we devote ourselves to. Campbell shouts out DPP’s democracy toolkit and encourages folks to “get out in the neighborhood, talk to your community members, talk to your church members, talk to folks who are affiliated with you and your different constituency groups. Tell them how important this fight is.”

The idea is that talking to people about their lives, their hopes and anxieties for the future, is a great tool for overcoming the terrible isolation that haunts so many. It is also an act of bridge building, one that can lead us to develop deeper commitments towards each other and the world we share.