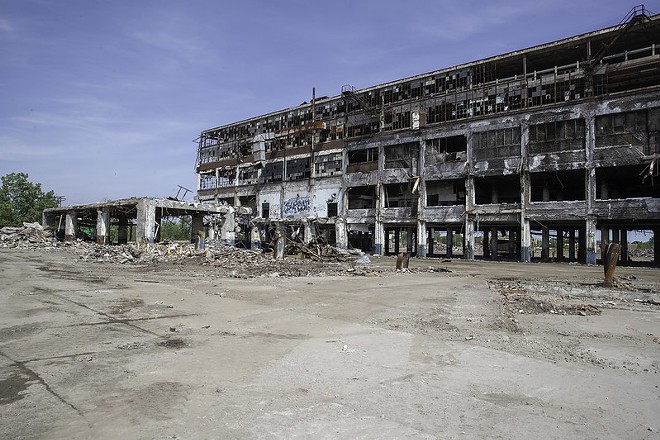 The state of Michigan announced Friday that it’s awarding $3.6 million in brownfield grants for the redevelopment of four contaminated and abandoned industrial sites in Detroit.

The plans include a large, multi-tenant industrial facility at the former Cadillac Stamping Plant, the renovation of blighted buildings on the city’s east side for apartments, a restaurant, retail stores, and a gallery, and the creation of a new park along the Detroit River.

Brownfield grants are used for the cleanup of abandoned properties where redevelopment is complicated due to toxic contamination.

“A century of industrial and commercial operations at Cadillac Stamping properties left a legacy of contamination,” Liesl Clark, director of the Michigan Department of Environment, Great Lakes, and Energy (EGLE), which awarded the grants, said while visiting the site this week. “Investing in this project, and redeveloping brownfields, ensures a healthier environment for all of us. It also supports a vibrant economy in Detroit, and beyond.”

Construction began this week on M3 Commerce Center, a 684,000-square-foot industrial building at the site of the former Cadillac Stamping Plant, which was demolished this summer, at 9501 Conner. The Lear Corp. plans to use the building to make seats for GM’s Factory Zero Assembly factory in Detroit/Hamtramck and hire 400 new employees.

The building was contaminated with volatiles, semi-volatiles, polychlorinated biphenyls (PCBs), cyanide, and select metals. The $1 million grant will be used to design and install a vapor mitigation system and stormwater detention pond liners.

Another $1 million grant will help clean up contamination at 7303 W. McNichols for the redevelopment of a former gas station and two neighboring abandoned buildings. Developers are building a 38,000-square-foot building that will house 38 residential units and four commercial units.

The site is contaminated with petroleum-related compounds and asbestos.

Construction is set to begin this fall and is scheduled to be complete in the summer of 2023.

EGLE awarded a $1 million grant to help address contamination at a riverfront property just west of downtown, where the Detroit Riverfront Conservancy is building a 22-acre urban green space that will feature a water garden, playground, sports house, a spacious lawn for special events, and a central park offering food and drinks.

The property was the site of several industrial operations, including a newspaper printing and distribution facility for the Detroit Free Press, from the mid-1880s to about 1977. The soil and sediment are contaminated.

Another redevelopment project is at 7891 and 7903 E. Jefferson, where new residential apartments and commercial spaces are being built. The project includes the renovation of two historic residences, including the White Building/Aniwa Club, which functioned as Prohibition-era speakeasies from 1929 to 1931.

Two adjacent commercial striations also will be renovated, and a parking structure will be demolished.

The redevelopment will make way for three commercial units for retail, restaurant, and gallery use and 36 residential units.

A $600,000 grant will fund the cleanup of gasoline from a leaking underground storage tank.