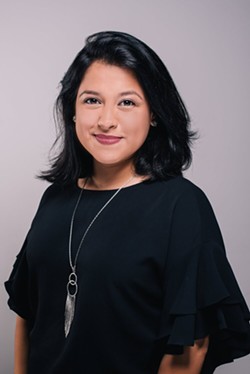 As the Detroit Free Press points out, Duggan made the endorsement somewhat reluctantly. It followed a Deadline Detroit article linking Duggan and Santiago-Romero's opponent to dark-money political groups. Duggan appeared to make the endorsement to distance himself from the allegations in the report.

"I read this story that says dark money groups affiliated with me are supporting Hector Santiago for City Council district in District 6. I've been at none of his events, I've not done a thing to help. And the group they claim I'm associated with, I have no connection with," Duggan said. "When you look at the story, it's because we both hired the same lawyer."

In a statement to the Free Press, Santiago-Romero said, "While I have never sought this endorsement, I know that it recognizes our campaign efforts. I met with the Mayor and other stakeholders at the beginning of the campaign to discuss District 6 issues. As an independent and progressive leader, I research, meet with stakeholders, and do the work needed to get my community the resources they need and deserve. At the end of the day, endorsements don’t win elections; connecting, respecting, and working with community does. I trust District 6 voters to decide who will best fight for our needs on council."