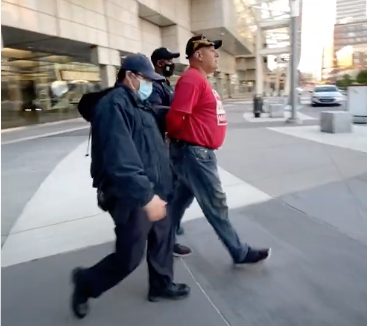 A Trump-adoring Warren City councilman has been arrested for a third time in a little more than a year, this time for refusing to don a mask inside the TCF Center in downtown Detroit.

Eddie Kabacinski and a bushy-bearded cameraman wearing a Make America Great Again hat marched into the building without masks en route to a public hearing on redistricting. Detroit police stopped Kabacinski and said he must wear a mask, pointing out the building was used as a vaccination site.

Clearly trying to make a point in front of a camera, Kabacinski, who was wearing a “Conservative Values Matter” shirt, identified himself as a Warren councilman and called the officers “Gestapo” while demanding to enter the meeting maskless.

“You are all brainwashed for wearing this damn thing. That’s on you. I’m not brainwashed. I’m fine,” he told the officers. “I’m a councilman and I happen to be informed and educated.”

After seven minutes of claiming he had a constitutional right to attend a public meeting without a mask, Kabacinski tried to walk past the officers and was stopped by one of them.

“Don’t lay your hands on me,” Kabacinski said. “I’m going to defend myself. Do you understand me?”

About a minute later, after again trying to move past the officers, he was handcuffed, whisked into a squad car, and taken to jail.

In September, Kabacinski’s colleagues on the council called on state officials to consider disciplinary actions against him after he was arrested for a second time in late August for selling Trump-related merchandise without a permit in Utica. In October 2020, he was charged with assault and battery and impersonating an officer after he chased down a 24-year-old woman, grabbed her, and handcuffed her for placing a Black Lives Matter sticker on a Trump campaign sign.

"To have a member of the City Council go down this path of unlawful actions is truly upsetting and we believe it to be a disservice to the good people of Warren,” council President Patrick Green said in a statement at the time. “Our residents deserve better.” Metro Times couldn’t reach Kabacinski for comment.