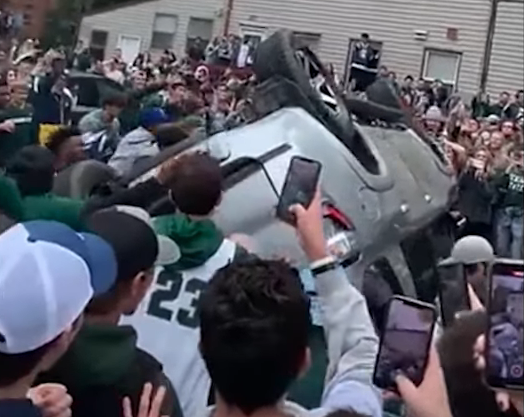 Last summer, a sustained protest movement against police brutality generated a nationwide panic among the Fox News-watching set that dangerous "radical Marxists" were taking over America's streets. In Detroit, the panic led to police, then led by Republican gubernatorial candidate James Craig, to crack down on peaceful protesters, shooting them with tear gas and rubber bullets. (The city is now being sued by legal observers and a bystander who was walking his dog.)

Detroit is a city known for being set on fire over the years — it's even on our flag — but vandalism during the summer of 2020 was relatively minimal. Aside from some smashed windows and graffiti early in the movement, Detroit did not see the level of destruction that other cities saw during the 2020 summer of civil unrest. Eventually, police and protesters appeared to reach a sort of truce, with DPD officers even escorting the marchers down streets by the end of the summer.

So that's why it was utterly jarring to see the images coming out of East Lansing over the weekend, when Michigan State Univerity's football team squared off against rivals University of Michigan. Though the Spartans defeated the Wolverines 37-33, MSU students went absolutely apeshit anyway, setting at least 57 fires and even flipping over an entire car, according to MLive.

The riots occurred on Saturday, which also happened to be Devil's Night. In Detroit, Devil's Night was long known for arsons, especially the year 1984, when hundreds of fires were reported. But the practice has declined in recent years, thanks to citizen-led "Angel's Nights" initiatives to patrol the streets, and fires have dwindled over the past few years. This year, the city reported only three.

The East Lansing Police Department is now using social media to track down the rioters, much like the FBI is tracking down the Trump-supporting wannabe-insurrectionists that stormed the U.S. Capitol on Jan. 6. Forgive us for thinking that Gen Z would be at least a bit technologically savvier than MAGA boomers when it comes to oversharing on social media, but just look at that sea of cellphones.


One video shows a young man trying to stop the carnage. Perhaps unsurprisingly, he appears to not be white.

A vehicle has been flipped. Students currently celebrating atop and kicking in the windshield. @thesnews pic.twitter.com/3Xzj0RkY4x


While Gov. Gretchen Whitmer, a Spartan, supported her alma mater by tweeting "#GoGreen," she did not condemn the destruction, though we don't blame her for not wanting to draw attention to any connection, even tenuous, to it.

Still, this tale of two cities has us feeling pretty gaslighted. Is Fox News playing footage of the mayhem on repeat? Are they calling for a ban on radical American football?

Between Spartans fans' appetite for destruction and MSU's connection to the biggest sexual abuse scandal in U.S. sports, maybe it needs to be shut down, at least until we can figure out what's really going on over there.