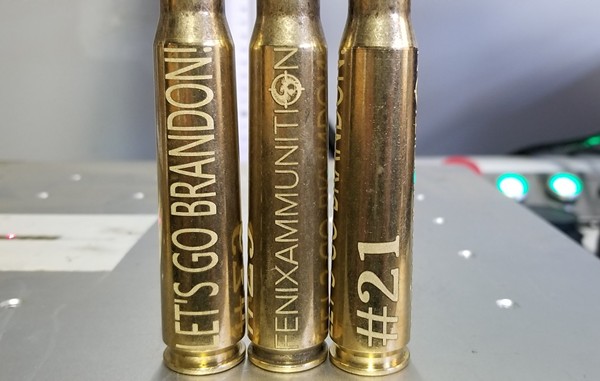 Fenix Ammunition is selling the laser-inscribed, 50-caliber cases for $25 apiece.

The phrase originated from a NASCAR race in which a journalist misreported the chant “Fuck Joe Biden” as a cheer for the winning driver Brandon Brown.


The expression has become a right-wing rallying cry and has been chanted at sporting events and printed on shirts, hats, stickers, beer coolers, and face masks, turned into a cryptocurrency, and repeated by Sen. Ted Cruz of Texas and Rep. Bill Posey of Florida. U.S. Rep. Lauren Boebert of Colorado wore the phrase on the back of a dress to a party at Donald Trump’s Mar-a-Largo resort.

Fenix Ammunition CEO Justin Nazaroff tells Metro Times that the bullets are “previously fired brass cases” and cannot be fired from a gun.

Nazarof adds that he’s not worried if some people take offense or consider the inscribed cases threatening.

“I’m not a humorless loser, and it’s not my responsibility to be concerned about the opinions of ignorant people who spend too much time reading the Metro Times, cowering in their homes, awaiting their fifth booster shot,” he says.

Last year, the ammo store boasted that it was flouting Gov. Gretchen Whitmer’s mask mandate for businesses, notifying customers that they aren’t allowed inside the store unless they remove their face coverings.