Anti-vax Wayne County Republican is in ICU with COVID-19 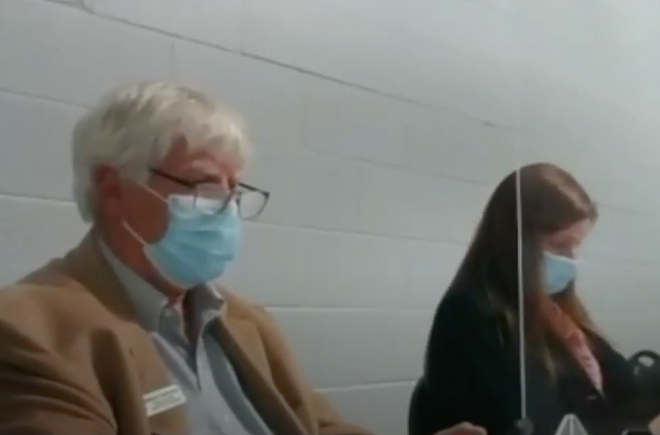 A Trump-adoring Wayne County Republican who spread misinformation about COVID-19 and the vaccine has been hospitalized in intensive care after contracting the virus.

Anti-vax Republican who refused to certify Detroit's election died of COVID-19
By Lee DeVito
News Hits
William Hartmann, former vice-chairman of the Wayne County Board of Canvassers, has been on a ventilator since about Nov. 6, according to his sister Elizabeth Hartmann.

Two sources confirmed to Metro Times that Hartmann has been in intensive care since early November.

The status of his health is unclear.

Hartmann, who refused to certify the county’s election in November 2020 after Joe Biden won, downplayed the coronavirus in a February 2020 Facebook post and questioned “all the hullabaloo in the media about” COVID-19. He suggested it was “about the money.”

In the months since then, he has criticized the vaccine and compared government COVID-19 efforts to Nazi Germany.

Conspiracy theorist and former state Sen. Patrick Colbeck shared the news about Hartmann on his Facebook page, leading to a lot of prayers and condemnations of hospital care from his followers, but none of the 115 comments mentioned the importance of the vaccine. Colbeck's Facebook profile picture reads, "I am not vaccinated, I'm in the control group of the experiment."

It’s unclear whether Hartmann is vaccinated, and in a recent Facebook post he falsely suggested it was a violation of his First and Fifth Amendment rights to be forced to divulge his vaccination status.

Hartmann was critical of efforts like Gov. Gretchen Whitmer's lottery to encourage vaccinations. On July 30, Hartmann posted on Facebook, “If the ouchie is so great, why do they have to offer bribes?”

Michigan’s hospitals are reaching or exceeding capacity, largely because unvaccinated people are contracting the virus and getting seriously ill. As of last week, Michigan leads the nation in COVID-19 cases.

Of the 1,423 COVID-19 hospitalizations between Oct. 7 and Nov. 5, 72% are unvaccinated residents, according to the Michigan Department of Health and Human Services. During the same time period, 76% of the 622 people who have died from COVID-19 were unvaccinated.

To put that into perspective, about 70% of Michigan residents have received at least one dose of the vaccine.

Hartmann’s hospitalization is just the latest cautionary tale in a country where the virus and vaccine have become politicized and scientific research is often dismissed.