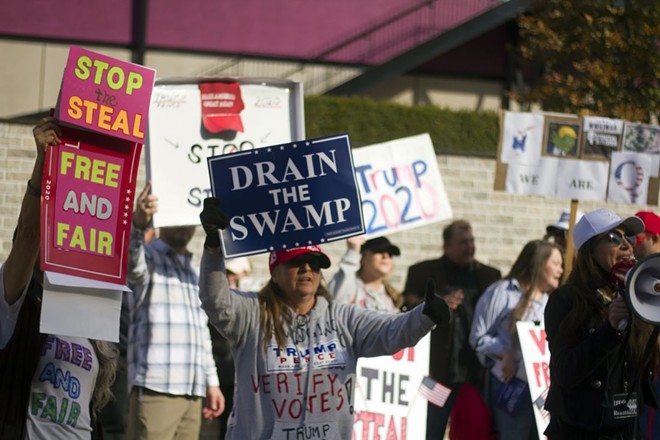 The state of Michigan has been awarded nearly $22,000 as part of previously-granted sanctions against the so-called “Kraken” attorneys, who brought frivolous, misinformation-laden claims before Michigan courts last year in an attempt to overturn the 2020 presidential election for former President Donald Trump.

“The awarding of fees further holds accountable the attorneys who worked to distort our democracy in favor of lining their own pockets,” Nessel said in a statement Friday. “These attorneys demonstrated a flagrant disregard for the law and attempted to use the courts to further a false and destructive narrative.

“While there is likely no amount of money that can undo the damage they caused, I am happy to see these sanctions handed down.”

“There are consequences to filing meritless lawsuits to grab media attention and mislead Americans,” Benson said Friday. “The sanctions awarded in this case are a testament to that, even if the dollar amounts pale in comparison to the damage that’s already been done to our nation’s democracy.”

In her 110-page opinion in August granting the sanctions, U.S. District Court for the Eastern District of Michigan Judge Linda Parker wrote that the lawsuit “represents a historic and profound abuse of the judicial process” and “should never have been filed.”

Powell is a QAnon conspiracy adherent, the public face of the “Kraken” lawsuits and a former Trump campaign lawyer. Hagerstrom is the former head of Americans for Prosperity-Michigan and was the director of Trump’s 2016 Michigan campaign.

The failed lawsuit in question had cited unsubstantiated claims of widespread voter fraud and other alleged misconduct in Michigan’s election process in an effort to overturn President Joe Biden’s victory in the state.

Biden beat Trump in Michigan by more than 154,000 votes, while more than 250 state and local audits found no evidence of widespread voting problems or fraud.

In the August opinion and order first granting the sanctions, Parker wrote that the attorneys “abused … well-established rules” in litigation by proffering claims not backed by law or evidence, and instead proffering claims based on “speculation, conjecture, and unwarranted suspicion,” among other misdeeds.

Originally published December 3, 2021 on Michigan Advance. It is shared here with permission.