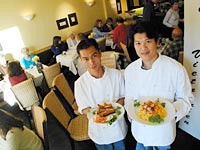 We’ve been hearing a lot about Vietnam lately, in observance of the 25th anniversary of the U.S. government’s surrender in that war.

At Annam the cuisine lets bygones be bygones: Two soups named Pho Ha Noi and Hu Tiu Sai Gon are adjacent on the menu. Vietnamese words have only one syllable, which is why you see those spellings rather than Hanoi and Saigon.

The restaurant’s name, Annam, comes from An Nam, the name of ancient Vietnam under Chinese rule. It’s a good idea, to hark back to the imagined serenity of ancient times. Simple prints, drawings consisting of a few brush strokes, are on the walls. The decor is spare and elegant: wicker chairs, fragrant jasmine candles, white table linen, orchid plants, a fat Buddha to whom good luck offerings are made (baby bananas one night). A Fuji mum on each table is the perfect example of "less is more." Chopsticks are made from dark wood and the matching flowered chopstick rests are from Vietnam.

Vietnamese food is delicate and fresh (or it’s supposed to be; I’ve had it gloppy elsewhere). It’s influenced by the cuisines of China, India, Thailand and France, but is lighter than any of those. Perhaps in compensation, Annam’s serving sizes are generous.

Co-owner Nguyen Phuong says, "A lot of people are asking me the difference between Vietnamese food and other Asian food. We use a lot of fresh herbs and fresh noodles. We do stir-fry, but we use few oils, not like Thai food or Chinese. The spices are more to enhance the taste of the meat than to take away flavor. It’s very light, very healthy. It still has the flavor of what you eat."

You begin your meal with shrimp chips that are not pastel-colored: You feel like you’re eating, but you don’t get filled up.

The appetizer sampler is a good idea (but too much for two people). It includes crispy rolls, spring rolls with mint and lettuce, shrimp toast, beef brochettes and chicken satay with peanut sauce. The beef is the star here, with scallions sharpening the flavor.

The spring rolls are far lighter than the Chinese version, and definitely lighter than egg rolls. Pork and chicken are mixed with carrots, jícama, black mushroom and bean thread, in a roll of rice paper. Asked if there’s anything she wants customers to know about Annam, co-owner Nguyen says that they should feel comfortable eating their rolls with their fingers, as it’s done back home.

It’s normal for restaurateurs to say they want you to experience and enjoy their culture, but as Nguyen lovingly explains her recipes, you get the feeling she really means it.

If there are recurring themes at Annam — besides grace — they’re cilantro and mint and stark white crystal vermicelli. The Vietnamese bouillabaisse, for example, which is nothing like the French dish, uses them, as does Pho Ha Noi, a beef soup with rice noodles. The soups, which also include two shrimp versions, are large and thick without being filling.

Under the salads and vegetables category, two dishes were surprising in different ways. The stir-fried vegetable medley looks like the cornstarch-enhanced disasters served in the worst Chinese restaurants, but doesn’t taste that way at all. Button, straw and shiitake mushrooms, baby corn, broccoli and carrots are all infused with coconut. Bean sprouts garnished with shrimp are warm and — again — about the lightest salad you’ll ever eat.

Among the 17 main dishes, we tried "rice with perfumed mushrooms and chicken." The natural flavor of the shiitakes is enhanced with jasmine and ginger.

Shrimp mousse on sugarcane (chao tom) wraps the shrimp around the cane for a chop effect, with a peanut-scallion relish on the side. (Don’t try to eat the cane, just suck it discreetly.)

Honey-roasted chicken is good but a bit too Western to want to order in an Eastern restaurant. We substituted tofu in one chicken dish, with An Nam sauce (you can do this for any meat dish), and found it very plain.

Desserts are again delicate and appealing (no Snickers cheesecake here). One night the warm special combined tapioca, mung beans, coconut cream, seaweed and coconut shavings. Another night we had a slim warm banana rolled in sesame seeds and floating in a coconut sauce.

Annam is open Monday-Saturday, and already full of happy diners.