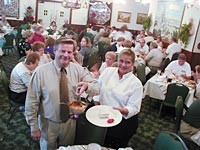 Steve and Darlene Szatmari's downriver Hungarian Rhapsody is filled with families who want to eat food that tastes like grandma used to cook, without putting in grandma's hours in the kitchen.

Actually, a large proportion of the clientele are grandmas themselves, now retired from the production of stuffed cabbage and strudel and homemade chicken soup. Szatmari describes his clientele as second- and third-generation Hungarians, Poles, Germans, Austrians and Romanians.

Everyone knows that these cuisines are on the heavy side. When you sample them, you sometimes wonder how so many Eastern European immigrants gathered the energy to leave home and cross the ocean.

In a Hungarian cookbook, you may find larded pheasant and fried goose liver next to the Transylvanian layered cabbage. Says Janos Mohacsi, who publishes many such heart-stoppers, "Chicken paprikas ... is not exactly suitable for a weight-reducing diet, but it is very delicious."

Szatmari's chicken paprikas is indeed delicious, in a rich yet mild sauce. (Steve does the cooking, except for the exquisite desserts, which are Darlene's specialty.)

Those little squiggly dumplings are odd to those of us whose Southern grandmas made them big and fluffy ("That's a dumpling? That's a noodle!"), but they do add body nonetheless.

At the Rhapsody, red-brown beef goulash is served in a little kettle over a flame, reminiscent of the old country. (Steve came from Budapest in 1971.) This dish includes dumplings and potatoes.

The Hungarian combination plate lets you sample chicken paprikas, cabbage stuffed with pork, veal and rice, and a great breaded pork chop. The person exists who could clean that plate, I suspect, but I hope he's either a teenage boy or playing professional sports.

For an appetizer, try either hortobagyi palascinta (veal stew crepes, with sour cream) or the Hungarian hors d'oeuvres, which include two sausages, one mild and one fatter and spicier. There's also a mild cheese spread, korozott, which is made by mixing feta and cream cheeses with onions, garlic, paprika, ground caraway seeds and green onions.

Salads at the Rhapsody are disappointing — iceberg and dressing that tastes commercial. Chicken noodle soup is better, with an authentic broth, slender noodles and big chunks of carrot. Mushroom soup, though it looks homemade, is too reminiscent of Campbell's for me.

The Szatmaris serve four noodle dishes, including potato noodles and cabbage and noodles. I tried turos teszta, noodles with cottage cheese and bacon. This is really a children's dish, very bland, without sufficient bacon to keep it interesting.

The outstanding choices at Hungarian Rhapsody are the desserts. Kremes (pronounced kre-mesh) is puff pastry with vanilla custard filling. "The little twist she adds is butter cream," explains Steve. A hint of lemon helps too.

The crepes stuffed with apricot filling and sweetened cheese aren't delicate, but they're delectable warm, and a good change from chocolate. Walnut and chocolate tortes are also available, and sometimes apple and cherry strudel.

Maybe it's because of their fondness for paprika, but red is Hungarians' color, and it's found everywhere in the restaurant — in the embroidered tablecloths, on the pottery displayed, in the dried pepper pods hanging up (these are where paprika comes from). Take a close look at the kalocsai pieces framed on the walls, each of which takes a year for a Hungarian woman to embroider and tat.