Eating with the fishes 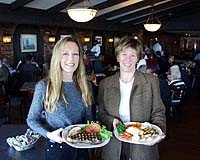 My friend Adam spent a summer waiting tables at Sindbad's. A restaurant insider, Adam says a clean kitchen is his bottom line, and Sindbad's meets his standards. A good place to make some money too, he said, as things are hopping all the time.

And so they were. Located on the Detroit River, boats can dock in one of the guest wells. But even on a wintry Saturday night, there was an hour's wait for a table.

Dinner at Sindbad's is roadhouse fare, with an emphasis on steaks, chops and fish. Surf and Turf (market price) is on the menu along with a 16 oz. Angus beef New York strip steak ($25).

Seafood appetizers include Snug Harbor mussels or Campeche Bay shrimp, and the clam chowder was the thick New England variety.

I had the pickerel, a delicately flavored white fish, which can be ordered broiled or fried. My broiled version came with a bright mix of herbs and spices on top. Potato and salad are included.

A friend was delighted to find baby greens in her grilled chicken salad. "I thought this would be an iceberg lettuce place," she said.

Sindbad's was a riverfront shack when Buster Blancke bought it with his brother-in-law, Van Hollebeke, in 1949. Denise Blancke, Buster's daughter, is now the restaurant's manager, and two brothers are also in the business.

Denise says the idea was to sell a few beers and burgers on the river while the two kept their day jobs. But Buster was handy with a hammer and just kept fixing up the place.

The bar area is the original shack, but a much grander building has grown up around it, with 265 seats in the main dining room and another 165 upstairs. Huge windows overlook the river.

Denise says that they are not trying to be fancy or expensive; the emphasis is on quality, with simple items that are cooked properly.

"If I can't get the exact shrimp or scallops that I want, then we're out, because I don't buy substitutes," she says.

The restaurant went through some lean years, she adds, but things are looking up. She likes the diverse crowd, as did I.

"People come in from the neighborhood, along with auto executives or UAW staffers from Solidarity House. We have people come from Grosse Pointe and West Bloomfield." Denise says she was having dinner recently and noticed some of her regulars coming in, now using walkers. Behind them was a crowd of 20-somethings, laughing and having a good time. "That's what's great about Sindbad's," she says.

I asked one of the waitstaff (all of whom belong to the Hotel Employees and Restaurant Employees Union) about the Sunday brunch, and she pronounced it "awesome."

For $12 you get all the eggs Benedict you can eat, which is probably just one if you are intrigued by any of the other buffet items, including omelets to order, waffles, sausage with biscuits and gravy, or even chicken and kielbasa. Not to mention fruit salad, muffins, coffee cake, smoked fish.

One complaint: You can have as much lox as you'd like, but there was nary a bagel in sight. What to eat it on?

Still, it's a lovely way to spend a Sunday morning, watching the river, enjoying the sun. No one seems to mind if you bring the New York Times.

In the winter, the boats are sheathed in bright blue or white plastic for protection, and the water around the docks is gray and frozen. Some, however, had shed their winter coats, revealing monikers such as "Last Chance III." Everyone should have three last chances.