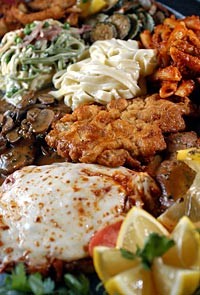 Roma Café is Detroit’s oldest restaurant, and it makes the most of the esteemed designation. But it’s the food — old-fashioned Italian — that explains why Roma Café is packed every weekend. There’s no parsley confetti on plate rims, but the tomato sauce is thick and rich, slow-cooked, with a deep, smoky flavor. You’ll find it on spaghetti, gnocchi, eggplant and veal parmigiana, polenta, lasagna and more.

Roma’s location in Eastern Market adds to its appeal. Originally a boarding house, by the 1890s Roma was a restaurant, a grocery store and a home. The Sossi family bought Roma in 1934. Janet Sossi Belcoure, the current owner, is the third generation of the Sossi family to preserve the establishment and its recipes.

This is Italian food from the old school, plenty of pasta and plenty of veal. My co-diner chose fried calamari, in which both the tentacles and rings of squid are heaped on a plate, no filler here. Veal comes in all the classic Italian incarnations — parmigiana, cacciatore, Marsala and picanti, with lemon, green peppers, artichokes or eggplant. Sweetbreads are also listed under veal, and at Roma are served in a wine and mushroom sauce.

I opted for Veal Marsala, and got the classic dish solidly flavored with the wine. There was plenty of meat but not enough mushrooms. For me, it was a little too straightforward. A side of pasta comes with the entrées, but otherwise it’s pretty much just meat.

There is an extensive Italian wine list and a full bar. I ordered a glass of Chianti, perfectly suited to this robust food.

The dessert list includes some of the best cannolis ever. The crisp, fried cannoli shells are filled with a generous portion of sweetened ricotta cheese, whipped light, and studded with bits of chocolate. Rum spumoni (from historic Alinosi’s confectioners and ice cream makers, also still located in Detroit) features delicate layers of rum, pistachio and dark chocolate ice cream embellished with nuts and candied fruit.

If you want a real bargain, save your receipt and come back for the Monday night buffet. You get $4 off the regular price of $15 with the receipt. Here you can sample the heart of Italian cooking, including spaghetti marinara, manicotti, veal parmigiana, chicken cacciatore, and big Italian sausage cooked with tomatoes and peppers. There is also an impressive array of antipasto, including a platter of salami, cheese, olives, peppers and tiny gherkins. I went for the tray heaped with artichoke hearts, while my co-diner reached for the plate of anchovies. For dessert, they offer as many of the delectable cannoli as you desire.

On a Saturday night, don’t go to Roma without a reservation (like we did). We waited in the entryway watching the tuxedoed waiters weaving through the crowd with heavy trays. “Looks like a Bela Lugosi fan-club convention,” my co-diner said. After an hour and a half in standing room only, tempers started to flare. Two women with a child kept wailing, “But we only want a salad.” Another woman approached the host saying, “I’m not enamored of you.”

He replied, “I’m not enamored of you.”

As they lobbed insults, her voice grew louder while his stayed calm. Some beer bellies came out of the bar to rally to the host’s defense. One chanted in a voice that could be heard across a stadium: “Dan! Dan! He’s our man!”

I looked at the co-diner. He did not look happy. Fortunately, we were seated a few minutes later and within moments we were placing our order and munching on crusty Italian bread. Things were looking up.

Memo to the City of Detroit: Roma is located on a dark and eerie corner, even with plenty of shiny SUVs lining the street. How’s about fixing the streetlights?