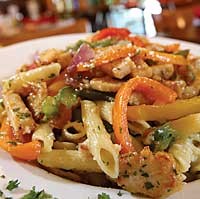 To be honest, when someone suggested taking a look at Cariera's in Dearborn Heights, I had to admit that I had never heard of the place, even though it has been around since 1992. After eating there, I now regret that it has been flying under my radar (and apparently that of other reviewers) all these years because it turns out to be a most pleasant neighborhood Italian restaurant.

James Cariera Jr., who took over operations after his father died this summer, is proud his kitchen bases many dishes on the recipes of his Sicilian grandmother. Snowbirds may be familiar with the two Orlando, Fla., Cariera's, which are owned by James' uncle and cousin. Although they are separate operations, the Florida and Dearborn Heights restaurants share a Web site, logo and menu design.

Cariera, manager Kelly Wasmund and chef Moe Elrefaey preside over a small, rather ordinary, stand-alone building on Telegraph Road (between Warren Avenue and Ford Road) that displays a somewhat surreal Italian flag on its sign.

Their cuisine, however, is far from ordinary. In two cozy rooms, with bare wooden tables and thick cloth napkins and walls full of family photographs and wine and oil bottles, Cariera's turns out a familiar array of old-fashioned classics. As befits a restaurant with few pretensions, most patrons do not dress up for a night out at Cariera's, even from Wednesday through Saturday when they feature mellow live music.

On one occasion, I was struck by the unusual integrity displayed by Pam, our accomplished server, when she took our order. We were dining incognito, of course, and when we began ordering far more food than would be normal for our numbers, she suggested that we had overdone it. This was a first for me. I have often asked servers at small-plates and dim-sum establishments whether we had ordered enough, but I have never heard a server volunteer that information without being asked.

She was right in cautioning us because Cariera's portions are oversized, including the appetizers that average around $8. I was especially taken with the zesty, expertly prepared grilled sausage and peppers, as well as the generous helping of shrimp, pleasingly al dente, accompanied by a sweet mélange of peppers, mushrooms and onions in a white-wine tomato sauce.

Other firsts include steamed mussels, two calamari dishes, breaded eggplant with sausage, cheese and marinara sauce, and bruschetta. You might want to bypass the bruschetta because, along with a basketful of crusty bread, Cariera's tosses in a handful of toasted seasoned bread strips that resemble their more elaborate appetizer cousin.

Entrées come with a choice of a chunky minestrone (what else?) or a pleasant green salad with two respectable house-made dressings and a more-than-routine side of pasta with a simple but rich tomato sauce.

Although I always fear that a moderately priced restaurant must cut corners with its veal, I was pleased to discover that Cariera's piccata ($17.95) was both tender and generous, with the overly lemony sauce a minor quibble. Ditto on the flavorful but heavy Marsala sauce in which the perfectly cooked-to-order sautéed beef tenderloins ($19.95) were awash.

But again, James Jr., who taught chef Moe how to prepare many of his family's recipes, is steeped in the southern Italian culinary tradition, a tradition not generally known for a light hand on the sauces. Thus, pollo cacciatore ($13.95), which was composed of chicken strips, peppers, mushrooms and tomatoes, arrived in another hearty if unsubtle white-wine tomato sauce. Other entrée classics include beef with mushrooms and gorgonzola, chicken tosca and veal with eggplant.

Averaging a few dollars less than the entrées, house-made pasta dishes feature pesto Cariera-style — which involves basil and oil tossed with sun-dried tomatoes and topped with pine nuts — and frutti di mare — consisting of sautéed shrimp, mussels and calamari in a tomato or lighter white-wine sauce over linguine. You can put together your own pasta dinner, selecting from a variety of sauces and noodles, for $11, with accoutrements such as meatballs for an additional $3.25.

Cariera's also offers five entrées al forno (from the oven), such as eggplant Parmesan, cannelloni and manicotti, which are available in combination as well as by themselves.

The serviceable list of 20 California and Italian wines, split evenly between red and white, is fairly marked up, with most less than $30. And the house wine, at $22.95 a liter for a decent pinot grigio or chianti of Italian origin, is another option. As for brandy, it is difficult to resist ordering an earthy grappa along with dessert (or maybe for dessert), considering the price — $3.50.

However you grapple with the grappa, the two desserts made in-house, huge portions to share of gooey tiramisu or cannoli, are inspired.

As our party finally waddled out to the parking lot, we agreed that it had been fun to "discover" Cariera's, a relatively unheralded restaurant that deserves more attention from those who need a periodic fix of southern Italian cooking.