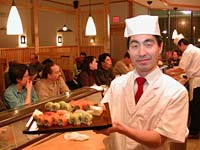 Asked his favorite Japanese restaurant in the area, the consul replied "Sharaku," with no hesitation. It's the most authentic, he said.   That was enough recommendation for me. On one Friday night, the fact that I was the only Caucasian in the place seemed to lend credence to the consul's sanction. (On Saturday, there were more gaijin.)

"Sushidokoro" means "sushi place," but Sharaku also offers 25 daily-changing appetizers, including catches of the day, and a relatively short list of entrées. If you want to branch out from sushi, the best route is probably to order a slew of appetizers, mostly $6.50-$8.50. Seating is at the sushi bar, or in a few booths parallel to the bar for nonsmokers, or in a well-segregated smoking section across the hall where each booth has doors, for privacy. As in Japan, the decor is spare, blond wood, and meals are served with a minimum of pretension — just artful arrangements of the food and garnishes themselves.

As you may know, the word "sushi" refers not to raw fish nor to fish and rice but simply to the short-grain rice itself, flavored with sweetened and salted rice vinegar. We Westerners treat the rice as the least important part of the meal, simply a backdrop, but the rice-conscious Japanese set store by different varieties. One expert, The Zen of Fish author Trevor Corson, says that short-grain rice is best for sushi because the grains align better, whatever that may mean. Align with each other? Align with the stars?

In any case, the antecedents of sushi first came about centuries ago in Thailand, as a byproduct of preserved fish. The fish was packed in pots of rice and buried for six months, where it fermented but didn't decay. People found that the rice around the fish was also infused with the fermented flavor, and they liked this tangy rice so much that they began eating it sooner, when it was only slightly fermented. Today we use doctored vinegar to impart the same sweet-sour sensation.

Slapping fresh raw fish onto this tangy rice was an innovation of Tokyo street vendors in the 1800s. This approach to eating sushi — nigiri, or a piece of fish or shellfish over rice — is still the preferred method in Japan, while Americans prefer sushi rolls. The Japanese eat rolls too, but they put their seaweed on the outside, as do Sharaku's friendly chefs.

You can get a California roll here (it's now migrated back across the Pacific to Japan), but no Philadelphia roll. You may want to branch out and try rolls of dried squash, burdock, ume shiso (green tea), natto (fermented soybeans) or orange clams.

When we ordered the chef's choice "sushi deluxe," 10 lovely nigiri pieces plus a roll, we got a fairly standard assortment of bonito, mackerel, shrimp, salmon, squid, tuna, conch, a sweet rectangle of cooked egg and neon-orange crunchy roe. One reason to order sushi this way rather than a la carte is the starters that come with it: crunchy pickles of radish turned bright yellow and cucumber now purple, and a delicious opaque broth with the most delicate of scallions, still crisp.

Another night, we enjoyed appetizers of yellowtail, two big pieces nicely grilled, and beef asuparamaki: grilled beef wrapped around crunchy asparagus (maki means "roll"). A fried mackerel appetizer was less successful, rather chewy and fishy, in a thick sauce of fish broth, soy sauce and "secret" ingredients. Cold grilled eggplant had lost all its eggplant flavor — a rarity for eggplant. An entrée of raw tuna over rice, though, was plentiful and satisfyingly steeped in hot tea.

At the back of your menu, look for a long list of liquors (shochu) distilled from different sources: sweet potatoes, barley, rice, buckwheat or potatoes (the most popular).

For dessert, green tea ice cream here is more strongly tea-flavored than elsewhere. Black sesame seed ice cream is pleasantly speckled and tastes, of course, like peanut butter. If you order kurogoma mochi ice, it's a dab of the same ice cream wrapped in a rubbery shell — perhaps a taste acquired in childhood but not accessible to latecomers.

Weekend reservations are recommended. Service at Sharaku is friendly even when you take a really long time to decide. As you leave, the sushi chefs wave goodbye.